Our second day began after a very enjoyable overnight stay at My Place Hotel in St. George. Accommodations were great and the service was, too.  We’d not heard of this chain before and something I don’t normally do here but I would recommend My Place to everyone.  They have tiny kitchens in the rooms plus they accept dogs!  Definitely a bonus on travels. 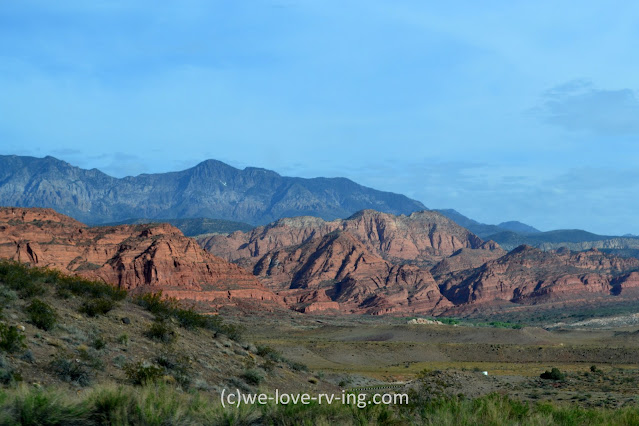 The sunny day offers some great sights of red rock as we make our way north on Hwy 15.   The highway has many long straight stretches of road and we often see signs that say “Drowsy drivers use next exit”.  There were some hills to climb and I was so busy watching the views, I almost missed the sign that said ‘Dog Valley Summit 6180 FT’ and snow only seen on the distant mountains. 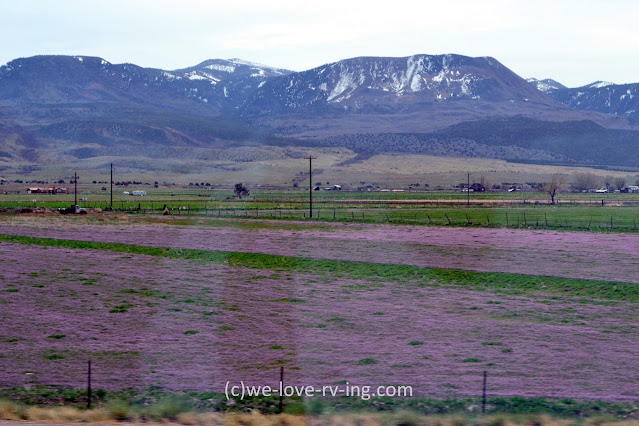 Utah is known to grow lavender but I don’t think this would qualify for that.  It was a pretty change from the roadside fields we’d been seeing so I thought it was worth taking a photo of.  We’d passed so many fields of Black Angus cattle with lots of little ones, that I stopped counting or taking photos of them.

We are beginning to see more snow on the mountains as we drive through Utah.  They offer fantastic backdrops to any photo and I can never seem to take enough of them.  The temperatures on our travels were definitely changing from what we’d left behind.

As we approach Salt Lake City, we see this church in the distance.  This would be only one of many beautiful churches in this city.  I wasn’t able to determine which church this one is but in researching for that information, I did see many architectural designs that are so interesting in Salt Lake City.

Salt Lake City and area have a population of over 1.1 million so is a very busy place.  The freeway that passes through is Hwy 15, the one we’ve been following and we’d been told by others who travel this way that it can be so busy and slow.  We timed it so well, purely by chance, passing through on midday Sunday and the traffic was fairly light with nothing slowing us down. 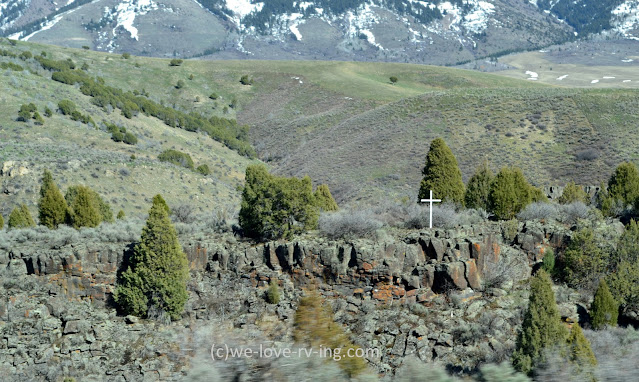 Within a couple of hours we’d passed many fields of cattle in Utah before crossing into Idaho and seeing these basalt columns, a very small and younger version of the Giant’s Causeway we saw in Ireland.  They’re created by the cooling and contracting of lava so we know these have been there for a very long time.

We are now getting into the flatlands where we’ll see many of these silos.  These containers for grain definitely indicate the big business that these fields create.  We pass so many different ones during our drive through northern Utah. 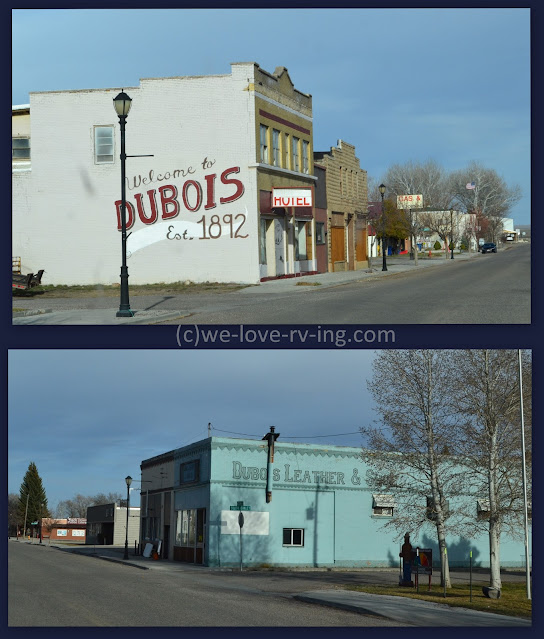 We made a quick stop at Dubois to see if we could find some fuel, but what we did find was basically a ghost town.  There was a gas station that was open but being Sunday, if there are any other operating businesses in Dubois, they weren’t open.  It is only about a 320 km (200 mi) drive crossing through southeastern Idaho from Utah to Montana so we waited for the next stop for fuel.  We are now heading into our fifth state on this trip. 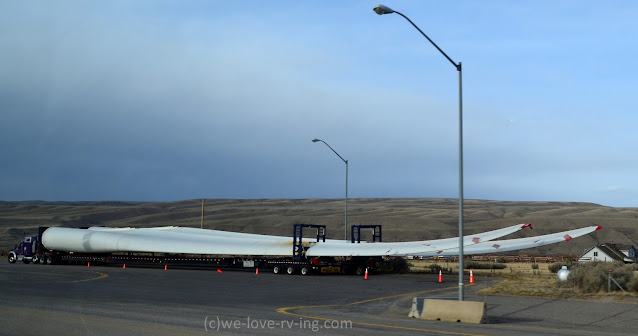 These are wind turbine blades that were travelling north following the same route we were so we saw them twice, but had to say ‘wow’ every time we saw them.  Never did we realize the size of them, in spite of seeing so many once they’re installed and working.  These are HUGE!

We spent the night in Dillon, Montana and although we didn’t have time to see much, we enjoyed what we did see.  It has a population of less than 4,000 but it took only one, the desk clerk at the hotel, to give us a very nice welcome.