The journey home begins on a sunny morning in Palm Springs, CA.  We’ve planned a route that will take us into different scenery and views than we’ve seen before.  It is always exciting to see new parts of the country and I will have the camera ready to capture as much as I can. 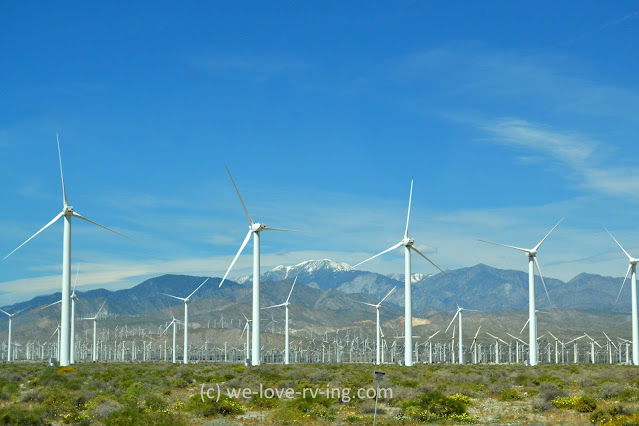 These are very symbolic for the Coachella Valley where Palm Springs sits, we won’t likely be seeing too many of these on our travels north.  There are thousands of windmills or wind turbines in the area which also tells you there are plenty of windy days, too. 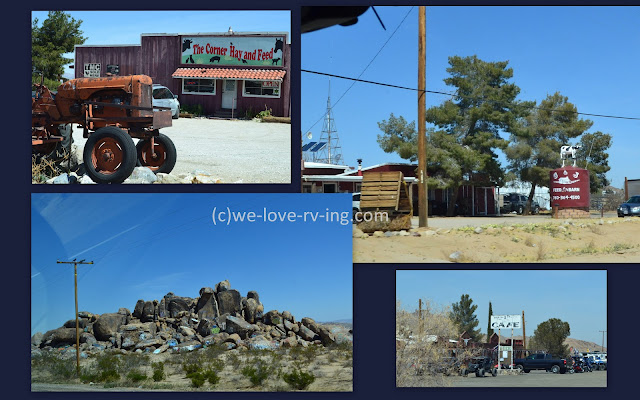 We head north up through the Yucca Valley which is bordered by Joshua Tree Park and is part of the Mojave Desert and is 3,000’ elevation.  The name comes from the Yucca palm tree, usually called the Joshua tree which are seen in this area.  It is native to the southwestern US.  We’ll see plenty of nothing once we get up there other than the occasional settlement and some interesting sights along the way. 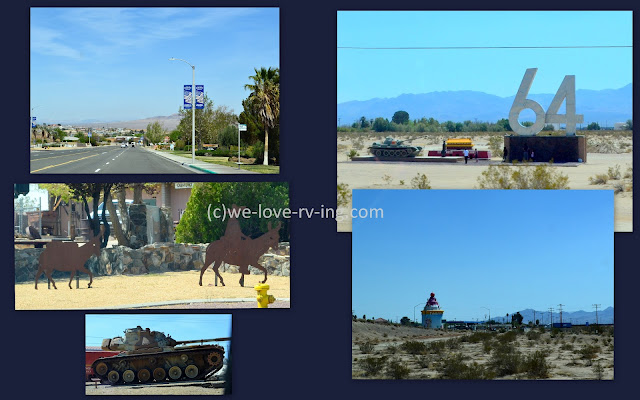 We then follow Hwy 247 for a quiet drive up to Barstow, CA.  As we drive into the city, we are seeing banners on all the city lamps honoring veterans with their different names on each one.  Very nice tribute to them all.  As we connect to Hwy 15 and head northeast we are seeing different sights that are tributes to the veterans.  The ‘64” photo is of the Liberty Sculpture Park at Yermo, CA as a tribute to “the fight for freedom”.  Eddie World ice cream structure is the largest gas station in California!

We’re approaching the border crossing into Nevada and come upon this huge solar panel plant.  In doing some searching, I’ve learned it is called the Ivanpah Solar Plant and is the world’s largest one!  The towers are almost mesmerising as we drive by, they are so bright.  The Ivanpah system covers 3500 acres of public land in the Mojave in total. 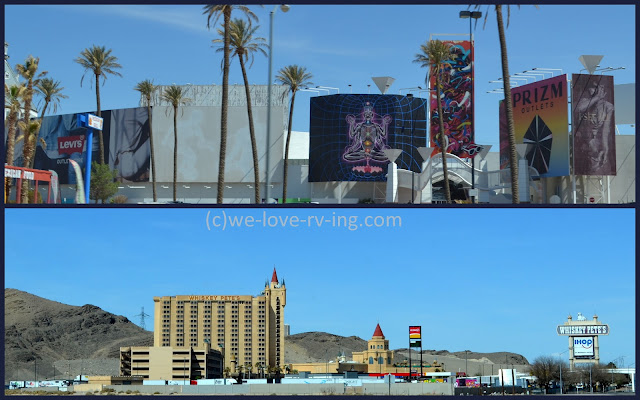 We soon cross into Nevada and sitting on both sides of the highway is a small version of Vegas with three casinos, one of which is closed now, plus some outlet stores.  We are past it within a minute on the road, Primm is very small community. 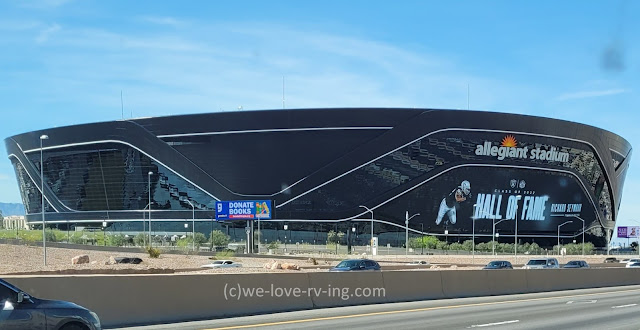 In less than an hour we are passing through the busy city of Las Vegas.  We are staying on Hwy 15 and the freeway bypasses the busiest parts of the city, but is certainly busy enough.  Most would know what Vegas looks like without me sharing photos of it but something new has been added within the past few years and that is this big beautiful stadium!  Great that it sits along the freeway so we were able to see it. 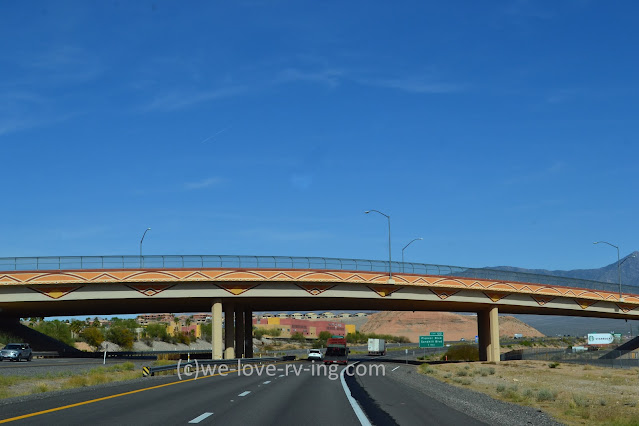 Mesquite sits close to the border into Utah so we’re beginning to see the red rock that Utah is so famous for.  Mesquite is named after a timber found in the area. Hwy 15 covers 199 km (123 mi) in Nevada so we spent very little time in that state. This overpass is an example of how so many are decorated rather than just being concrete.  I’ve taken so many photos of others that I could probably write a book on them, but I won’t. (: 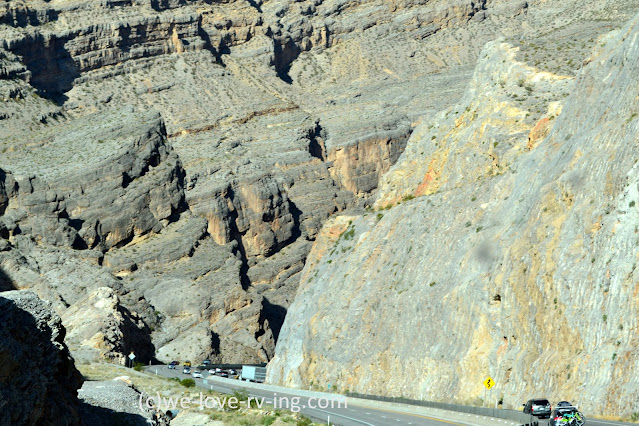 Virgin River Gorge
It wouldn’t be easy to explain my excitement when we arrived at the Virgin River Gorge!  We’d been here before but it had been several years and it was like seeing it for the first time again.  Photos just don’t do it justice but you can see the size of it when you look at the vehicles.  Wow! 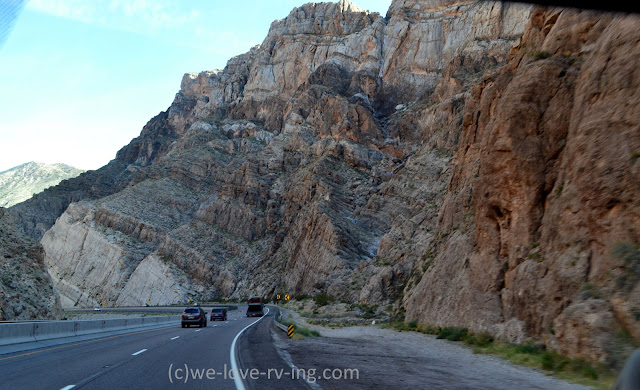 The actual gorge continues but the part I’m sharing is a small section that only lasts a few short minutes to drive through.  The 500 million year old gorge is such a sight to see.  It took ten years to build and was opened in 1973. 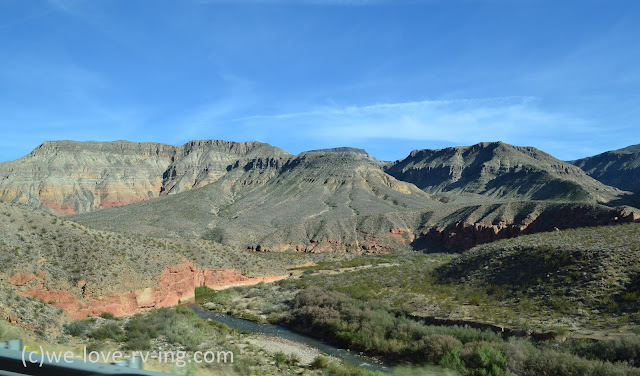 There isn’t much of an opportunity to view the Virgin River as we are driving through this part of the Gorge, especially with my eyes looking up to see all those incredible sights.  But I did manage to get this photo which includes some great looking mountains as well as the river.

Our first day of driving soon ends with spending a night in St. George, Utah.  More sights to share as we cross through this colorful state.