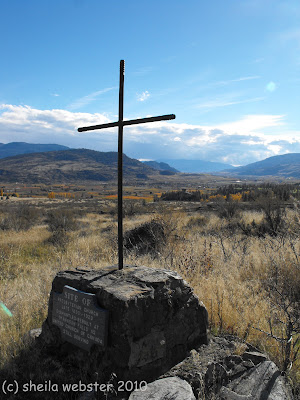 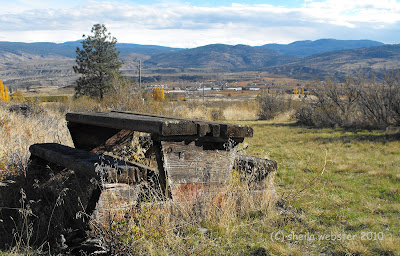 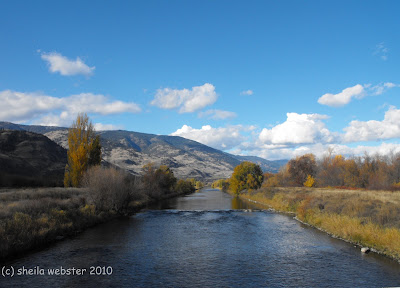 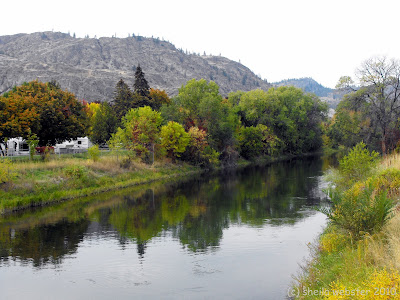 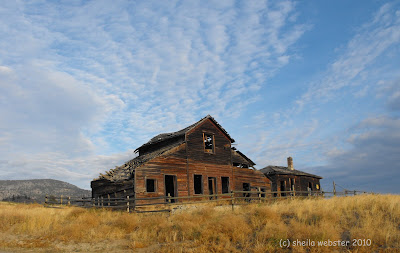 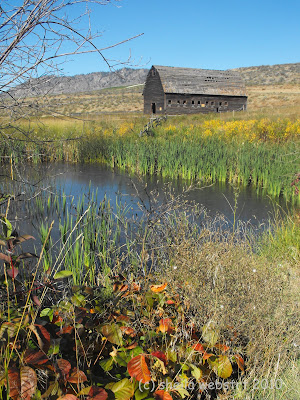 ﻿
We love RVing for many reasons.  We are able to have a new adventure wherever we may go and that may happen anytime of year.  A visit to the is southern BC holds a multitude of treats for the tastebuds most of the year from the vineyards and orchards but the feast for the eyes in autumn is absolutely amazing! 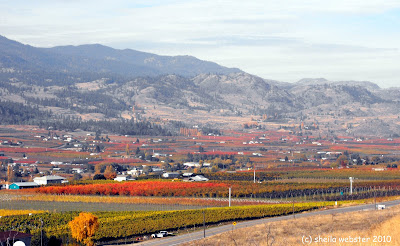 Autumn colors of the Okanagan Valley, BC
Long before Oliver was known as the Wine Capital of Canada, it was an orchard mecca for fruit lovers.  The first fruit tree planted in the was in the mid 1800’s and it has flourished ever since.  To this day there are still many fruit orchards and their color in autumn time is absolutely incredible. 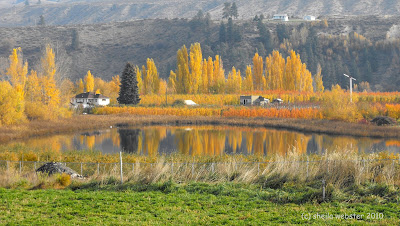 Autumn colors reflect in the pond in Oliver, BC
There are small treasures scattered around the area and I found one of those as I was out walking.  This pretty pond was not a five minute walk from our RV park and right behind the airstrip as our dog Maggie and I walked to take pictures of the nearby orchards. 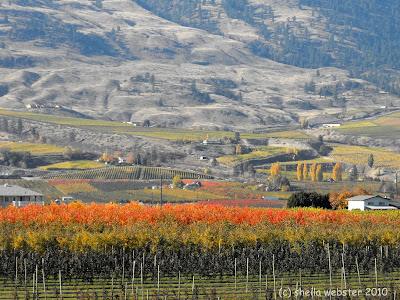 Autumn colors of the diversified landscape in Oliver, BC
The has a diverse landscape with hills and valleys that offers dry air, wind patterns, different soil and proximity to water from the “Ditch” which creates a growers paradise. 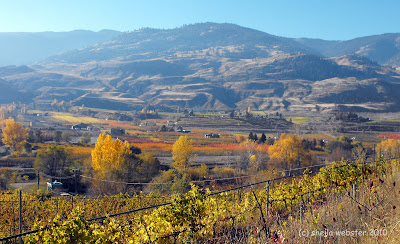 Standing above the vineyards looking down onto the orchards
Due to the hot and dry desert-like climate, there are few bugs, fungi or disease so less pesticides are used than in many other fruit growing areas. This is a big bonus in today’s awareness of creating a green footprint. 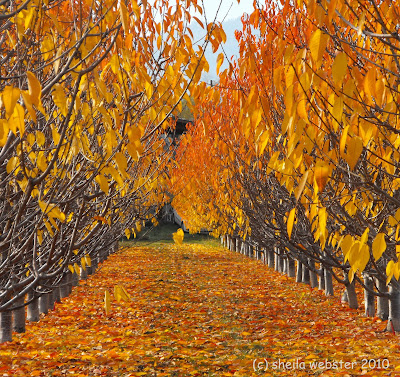 A bed of fallen leaves between the rows
Several varieties of many fruits are grown in the including apples, peaches, nectarines, plums, cherries and more.  This allows those living in , especially to have access to these fruits throughout most of the year. 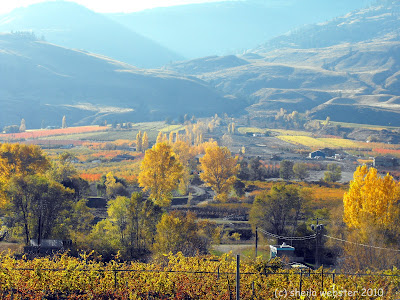 A hazy colorful valley in Oliver, BC
I admit that I am not sure which fruit tree is in some of these orchards in the distance, but the colors are the beauty of the autumn and the reason for the pictures.  I believe there are different colored leaves for different fruit trees. The vineyards do not have the same intensity of color in their changing leaves. 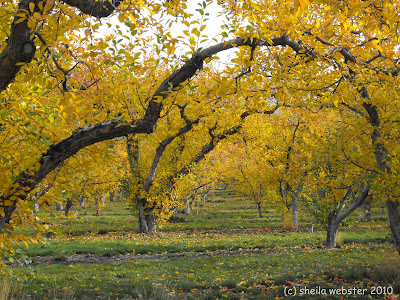 Rows of old apple trees are a sight to behold
Apple varieties grown here include Ambrosia, which in Greek means ‘food of the gods’. The Spartan apple, which is a varietal with Macintosh parents was first developed in the Summerland Research Station in 1936 and has been a worldwide favorite ever since.  Spartans keep well in cold storage therefore are available most of the year. 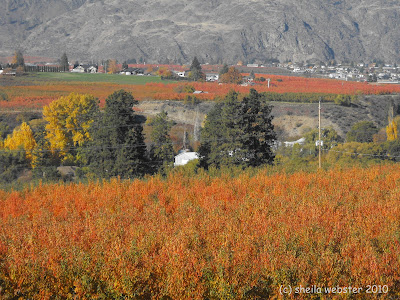 Delicious colors of orchards in autumn


These same Okanagan Valley orchards share much of the production of fruit in Canada.  They produce 60% of Canadian cherries, 50% of the Bartlett pears, 33% of Canadian apples, plus prune plums, peaches and assorted berries. 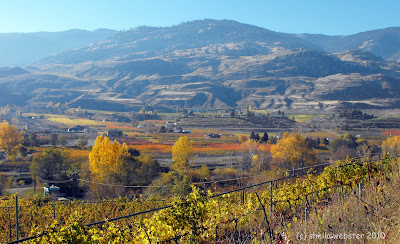 The beautiful Okanagan Valley at Oliver, BC
We can enjoy the colors of the trees and marvel at this valley but a very important thing for us to remember is to support local growers in order to keep them producing the delicious fruit of the beautiful

﻿Oliver, is our RV’ing home base for work for a few months which also makes for an easy drive to several beautiful locations in the of southern B.C. for the play part of RVing.   There are several places within less than an hour drive that will thrill the senses and offer many photo opportunites, which I admit I try to fulfill as often as I can. 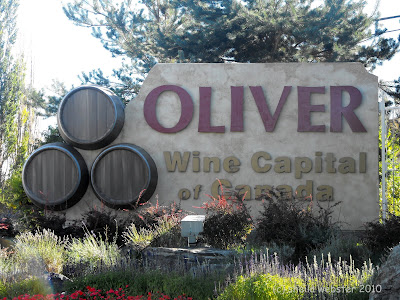 Oliver is located about 40 km. north of the border and has a population of about 4500 people.  It has earned the title of the Wine capital of because it now produces 10% of the nations wine, including many of its finest vintages. 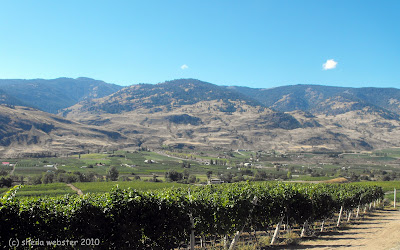 Vineyards across the Okanagan Valley
﻿ Glacial deposits formed the west bench during the ice age.  The west side of the valley seen in the distance across the valley is called the Golden Mile.  The deep sandy deposits on the east bench, which is where this photo was taken from, is Black Sage.  This combination provides an award winning wine industry. 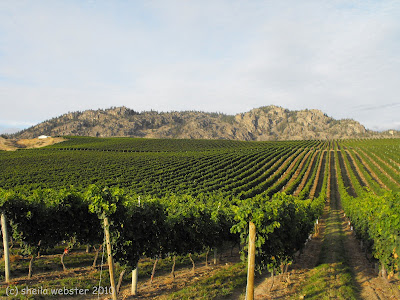 Vineyards on the east side of Okanagan valley
There are 27 different wineries that include 100 vineyards along Highway 97 and the backroads passing through Oliver that make up 53% of BC’s vineyard acreage.
A number of wineries open their doors for complimentary tours of their facility.  It makes for a great day tour, whether you take a self guided tour or sign up with a wine tour company that will drive you around as well as share their knowledge of the wine industry. 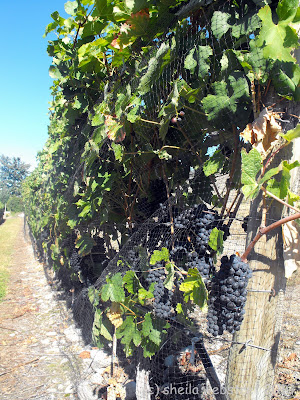 The grapes on the vine in Oliver, BC
The temperature for ice wine grapes must reach -10C (14F) before the grapes can be picked and I am told that it will usually happen at night when workers are called out.  They gather to circle their vehicles around the chosen vines to shine their headlights and the grapes can then be harvested. 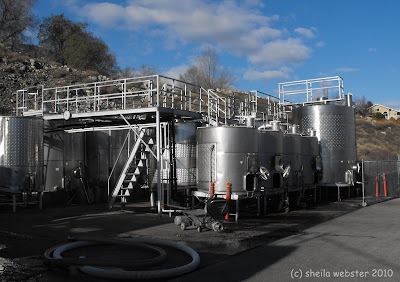 Cleaning the vats at the winery in the Okanagan
These fermenting stainless steel vats were being cleaned during my recent visit to the winery to purchase gifts for those special wine drinkers.   I purchased ice wines, which are a type of dessert wine produced from grapes that have been frozen while still on the vine. 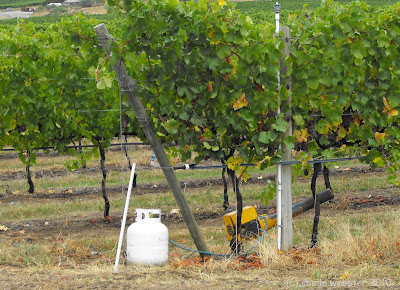 The propane exploder﻿ in the vineyards in Oliver, BC

I was standing at the side of the quiet road taking pictures of these beautiful acres of vines when I almost hit the ground to take cover from what sounded like a gunshot blast. I knew I wasn’t trespassing but it sure did make me nervous until I figured out what was happening. While you get that chuckle under control, I will explain further.
Birds can be a serious problem in the vineyards. They can destroy the crops and steps must be taken to prevent that from happening. Some vines are wrapped in order to prevent the birds from getting to the grape, shown in the picture of the grapes and another method used is the propane exploder. I found the culprit and took this picture.

Festival of the Grape
There are several festivals and events in the but one of the very favorites is the Festival of the Grape in Oliver.  The 14th annual festival was recently held and the crowds were there to enjoy the festivities that include activities for the kids, as well.  There were over 50 wineries gathered onsite, vendors with handcrafted clothing, wine & kitchen accessories, gourmet food items, an art show and sale, games, live entertainment and a grape stomp which may well be worth the price of admission alone.
The Okanagan Valley has so much more than vineyards to offer and I am anxious to bring more to show you.  Watch for the incredible autumn colors of their orchards in following pages.
Posted by Sheila and Keith at 10:08 AM No comments: