While we were RVing in the area, we’d heard that there was a ghost town so decided we should take a drive one evening to check it out. Most of the road into Quesnel Forks from Likely, B.C. is a dirt road but a nice drive you can enjoy if you take your time. We expected to see wildlife but only managed to see one bunny ! 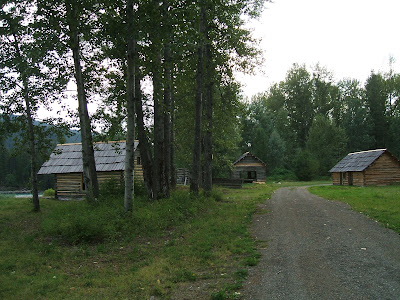 Main street of Quesnel Forks, B.C.
Quesnel Forks Ghost town is located where the Cariboo and Quesnel Rivers meet, 13 km (8mi) west of Likely, B.C. It was founded in 1859 as the first Cariboo ‘Gold Camp’ and was once the largest city on the mainland. Several totals have been given but according to one source, there were 5000 people living here. 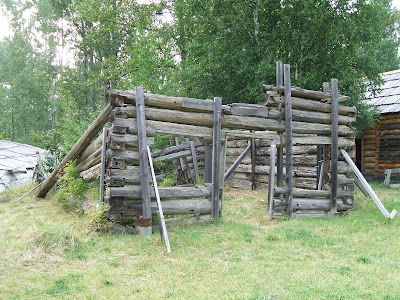 The remains of the Chinese General Store

It was a thriving gold town until the Cariboo Wagon Trail was completed to Barkerville in 1865 and had bypassed Quesnel Forks so the population waned. By the late 1860’s only Chinese miners and traders lived here. In 1954, the last Chinese-Canadian resident passed away. Since that time until the mid 1990’s, Quesnel Forks has been left to suffer from the elements. 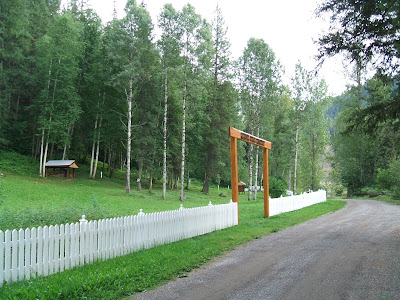 Quesnel Forks Cemetery
In recent years the Likely Cemetery Society has researched and re-commissioned the graveyard and restoration efforts have begun on the buildings in the old townsite. 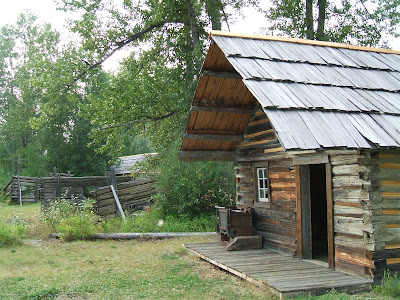 Not knowing what to expect, we were pleasantly surprised by the work done to restore Quesnel Forks Ghost Town.  There is a 150th anniversary celebration planned for the summer of 2009.

Nearby is the Forestry Service Recreation site for camping beside the Cariboo River, which is ‘user maintained’ with no fees required.
Posted by Sheila and Keith at 4:42 PM No comments:

Once again work takes us to a small interior community that we’ve never been to before. We have heard of Likely, B.C. but know very little about it and therefore expect nothing. One of the good things about this line of work is where it takes us but the great thing about RV’ing, it allows me to join K. on these work trips, too. One must always be willing to see and enjoy what this beautiful country has to show us.

Bridge into Likely, B.C. over the Quesnel River

Likely, B.C. is located at the mouth of the Quesnel River at the west end of Quesnel Lake and is one of the few remaining old gold rush settlements. It is on the Gold Rush Trail and is 80 km. (48 mi) NE. of Hwy 97 junction at 150 Mile House and 80 km. (48 mi) east of Williams Lake, B.C. The Likely area can boast that it is the only inland temperate rain forest in the world. 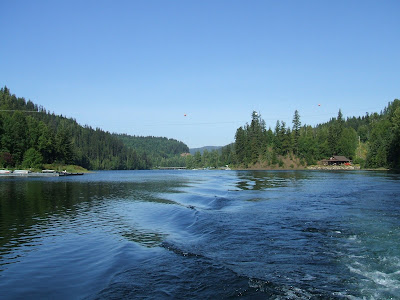 The population of Likely, B.C. is 300-350 people with a school, community hall, museum, chapel, library and post office. They also have a general store, restaurant, laundromat, pub/hotels and inns. There are guiding tours and operations, as well. One can partake in several sports in the area including, fishing, hunting, atv’ing, kayaking, snowmobiling and others, something for every season. There are several camping facilities in the area, including Cedar Point Provincial Park on Quesnel Lake. 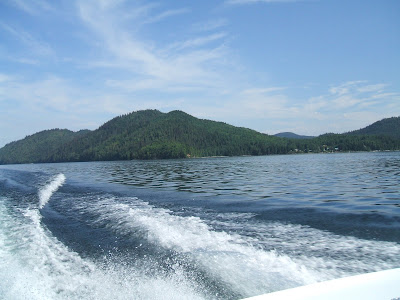 
Quesnel Lake is one of the many sources for sporting pleasures. I was surprised to learn that it is the deepest fjord type lake in North America. We joined friends on their boat for a great day on Quesnel Lake. It was perfect weather and we joined several of their friends on a beautiful sandy point and spent the day enjoying it all. Thank-you to Likely, B.C. for your hospitality.
Posted by Sheila and Keith at 3:37 PM 1 comment: