Day 3 of our travels home begin with a lot of dark clouds and tiny glimpses of blue sky above and doesn’t get much better.  We do have some sunshine to enjoy at times but the weather definitely convinces us we are heading north. 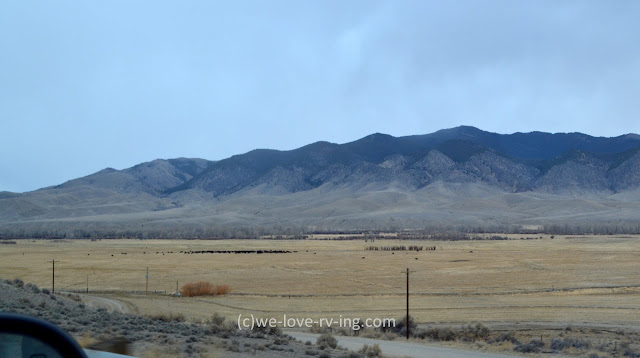 We are passing fields and fields of cattle, these ones must have been fed not long ago the way they gather around a long row of hay.  There are so many newborns in these herds, and the babies seem to enjoy laying in the hay, as I’d noticed in the ones closer to the highway.  I was so engrossed, though, that I didn’t get pictures and I saw that so many times!

The traffic is very light this morning, as most days have been in less populated areas.  We are seeing serious snowfall ahead, and can only hope that it stays to the west of us and isn’t on any of the road ahead.  We are approaching Butte and the temperature is 4c (30f) at this time of our drive.

Winding highway through the rocks

This reminded me of the Virgin River Gorge but I couldn’t find any name for it.  The highway winds around the rock faces and offers some great rustic rock as we climb up.  Although they’re not showing in this photo, the Big Belt Mountains are on the east side of the Missouri River, off in the distance from here, so I don’t believe these are part of that.  We are going to see more snow covered mountains ahead.

We crossed over the Little Prickly Pear Creek on this stretch of road, which is a tributary of the Missouri River.  Prickly Pear is a cactus plant known to be in the desert so it doesn’t sound quite right looking at this landscape, but some of this area in Montana is actually desert, so I’m guessing there are some prickly pear plants behind these rocky mountains.

This is the Lewis and Clark County so it shouldn’t be surprising that we’d see the Missouri River, which we are crossing over here.  Their expedition was a total of 7900 km (4700 mi) in 1804-1806 taking them across the country on the Missouri and then the Columbia River.  Great Falls, a town we pass on Hwy 15 has a Lewis & Clark Interpretive Centre which would share much of that history. 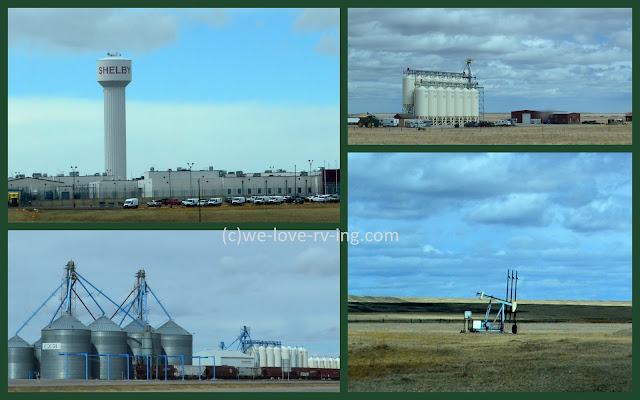 As we pass through northern Montana, we see a lot of fields, which really offer no great views other than when we find the heart of the crops of those fields.  And we did see plenty of them including this oil digger, which is called a pumpjack that we see here.  We saw several today, which are like so many we’ve seen in different parts of the country but I never knew what they were called.

Field of Vintage travels
Signs of times gone by, we see a display of some very old trucks that were likely for farm use back in their time as well as an old car that would have been considered a luxury then.  Wouldn’t it be interesting to really know the stories behind them all? 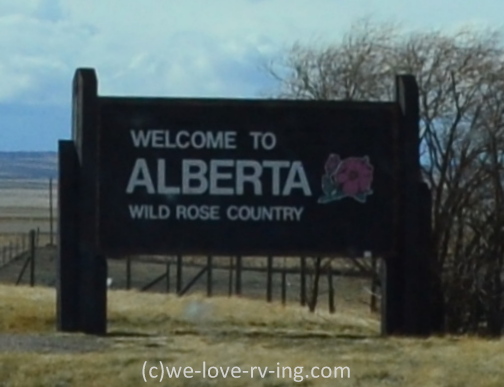 We arrived at the border at the time that we’d given as our time of arrival on our newly acquired ArriveCan online form but as it turns out, there is quite a line up in front of us, so much for planned timing.  It did take over 90 minutes to pass through the border with the long lineup but that was shorter than the 4 hour wait we learned about happening the days before.  Once through, we are back in Canada. 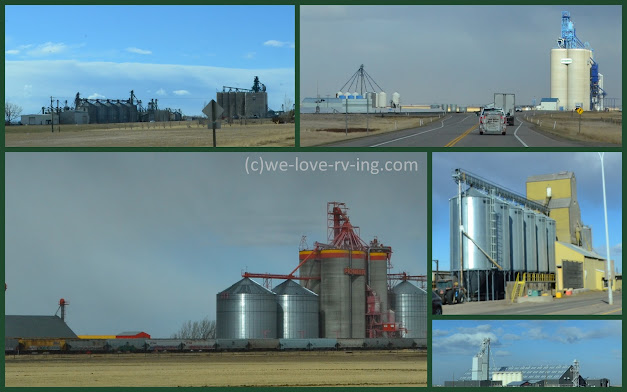 The scenery is so much like northern Montana while we drive through southern Alberta as we follow the Crowsnest Highway.  The sights are much the same as we see early days of crop fields between the small towns and villages before we reach Lethbridge, AB. 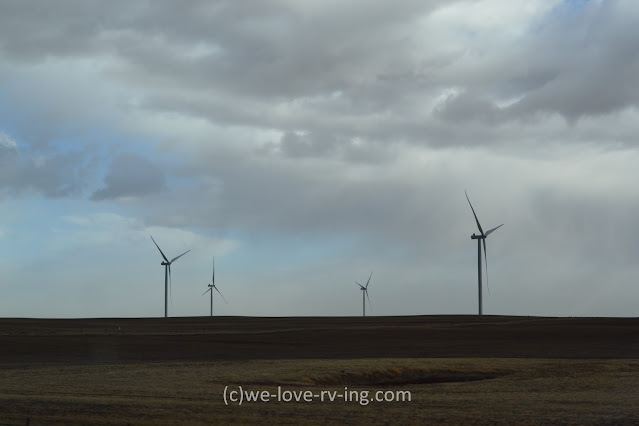 We may now know where the gigantic windmill blades were heading, (shown here).  The size is so deceiving but these are off in the distance and I do believe they’re of the same size.  This last photo of the day reminds me of the first photo on our day of departure from Palm Springs, CA.  This has fewer windmills and no blue sky and sunshine but still a reminder.

We are not far from Medicine Hat, AB, our destination for the next couple of days where we will visit with some very dear family friends.  Sounds like a good plan, eh?

Posted by Sheila and Keith at 2:08 PM