As we follow I-5 north, the skies are overcast and not showing blue sky and sunshine as we normally expect so we aren’t seeing all the mountain tops which offer incredible sights when the weather is right.  There are plenty of nice sights to see, including the view of this lake south of Ashland.  One day we shall take the drive east of Ashland to see Crater Lake but that is dependent on weather conditions.

There are several RV parks along this route but I hadn’t noticed the teepee’s before. They may be a new addition to this park but would make for a fun summer camping experience.  Looks like they’ve had to cover the top to keep out the rain so choosing the right time for visits would be important.

There were several places along the I-5 in Oregon that we were to see wild daffodils in bloom!  We were a bit earlier than normal this year, so were quite surprised to see these, not normally there on our way home, they’d usually be finished their bloom by then.

We had planned on enjoying the sights of the Columbia River Gorge on this trip home.  We’d not been this route, Hwy 84 before and were lucky to now have some blue sky and sunshine.  The Columbia River runs between the states of Oregon and Washington for about 130 km (80 mi.).  We can see the highway across the river in Washington on most of this trip. 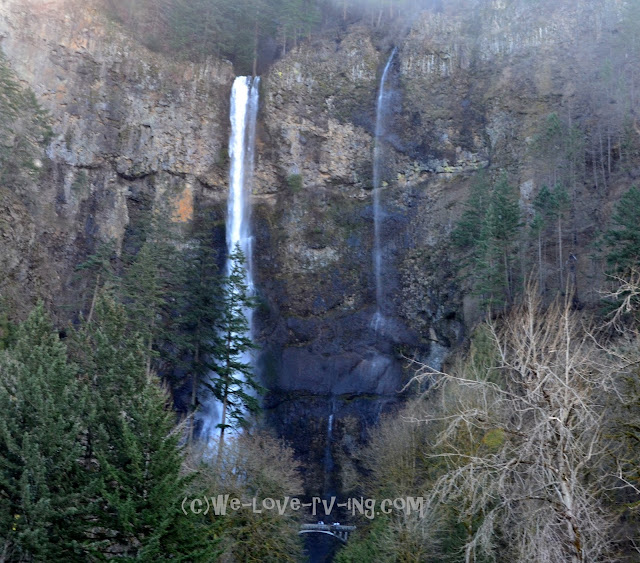 There are several falls along this route but the one that offers the most is the Multnomah Falls.  We parked across the highway from the entrance and took some photos.  We did not take the hike in to Benson Bridge to get a better view as it was a chilly windy day and figured we were fine without the hike.

The Columbia River Gorge National Scenic Area is part of the Cascade Mountain Range and is the largest "scenic area" in the U.S.  It varies from a rain forest to a desert and a sea level passage to alpine meadows. There are several historical museums along this highway that have stories to tell about the thousands of years of history including the Lewis and Clark expedition.

The river is very wide in parts which offers the room for the big river traffic like this barge.  We did see two or three of them carrying different cargo.  There were once sternwheelers using the river for transportation, as was done in so many places.  There are interpretive centers at The Dalles and Stevenson.  Then came the time for hydroelectric dams.

The Dalles dam is one of three dams located on the Columbia River Gorge and was completed in 1957.  It sits 309 km (192 mi) from the mouth of the Columbia River.  The power house is almost ½ mile long and has 22 generators, enough power to supply two cities the size of Portland, Ore.  The dam also offers flood control for the area.  There are train tours here so it would be a great way to learn about the dam.

We’ve now seen the Columbia River Gorge.  We were too early to see any sign of spring greenery or growth but the sights were great in spite of that.  We now cross the Columbia River at The Dalles and follow Hwy 97 north through Washington State to carry on.  There are several sights to share from this beautiful state, too.

Posted by Sheila and Keith at 2:10 PM