We Love RVing ~ Autumn Colors ~ Across the Country

Fall Colors in Canada from British Columbia to New Brunswick and Maine, USA
For those of us who live where we have four seasons, we likely have favorites for a variety of reasons.  There is most definitely something beautiful about snow covered mountains, spring blossoms brightening our yards up after winter, warm summer days at the lake but then we have autumn.
.
Autumn is one the most beautiful seasons with the colors of the changing leaves.  It varies from one area to another depending on the kind of trees there are and we have seen that difference during our RVing travels.  Do you wonder how this beauty happen?  I put this answer at the bottom of the page. 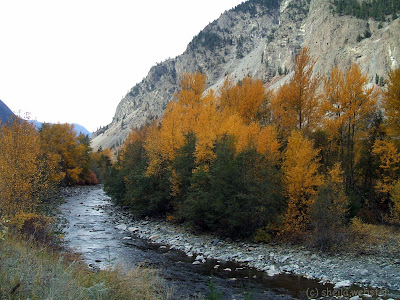 
While we were RVing in during the fall season, we drove Hwy 99 called Duffy Lake
Road in this area.  The road follows Coyoosh Creek for parts of the trip and it was near Lillooet that we saw this beautiful scene.   Click here for more pictures of this area. 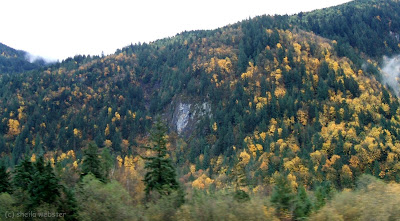 Coquihalla Highway near Hope, BC
Our view as we drive over the Coquihalla Highway #5 is mainly mountains covered in coniferous forests which can consist of spruce, pine and fir trees.  Coniferous means ‘coming from the cone’ and they don’t shed their needles over the winter.  But there are sprinkles of deciduous trees amidst those and they have a chance to show their glory when fall arrives. 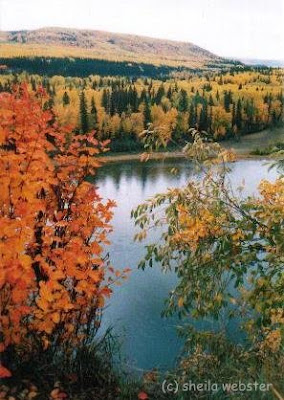 Peace River, Hudson's Hope, BC, Canada
I believe one of the most spectacular sights that I happened to see was on Highway 29, the drive between Hudson Hope and , as it follows the . 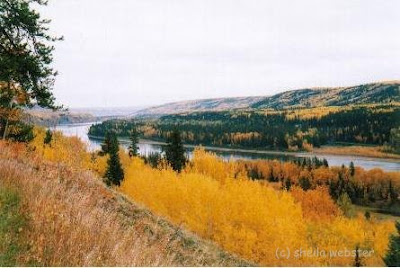 Peace River near Fort St. John, BC, Canada
I was not expecting to see so much color, it was gorgeous on that sunny day.  I had to make a second trip to see it all again, it was so beautiful.  Some of the most common deciduous trees, which shed their leaves annually, are birch, aspen and cottonwood trees and these are among the trees that follow the Peace River, one of ’s longest river systems. 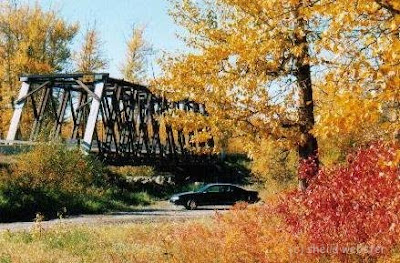 Bridge over Peace River, Hudson's Hope, BC, Canada
I took a zillion pictures and that was before digital!  It was a painful wait to get all those film developed but it was worth it.  Although pictures didn’t do justice to the sights I was seeing, they did come close.  There was more to see from the viewpoint at Fort St. John, clik here for more. 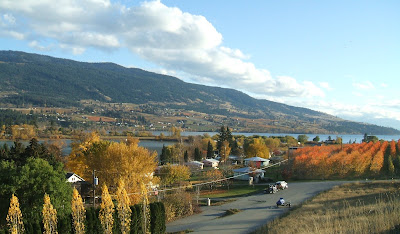 Okanagan Valley at Oyama, BC, Canada
On a drive through the on Highway 97 in BC, we stopped to take a picture of the colors as we look across to .  It is known for serenity and sunshine and displays that with wonderful colors on this day, nestled between and . 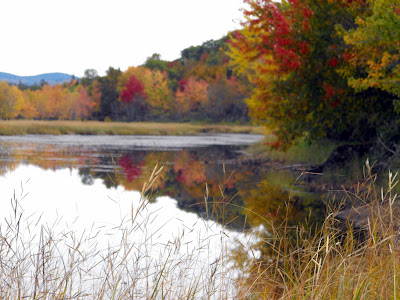 Herepis River Marsh, NB, Canada
Our Cross Canada trip of 2009 was planned so that we could see the autumn colors back east.  This had been a very important part of the planning because of the maple trees and their red leaves, which we don’t see in our neighborhoods.  The time of fall colors is a short one, there are only two weeks between beginning and end of those colors, so this should happen while we are in eastern . 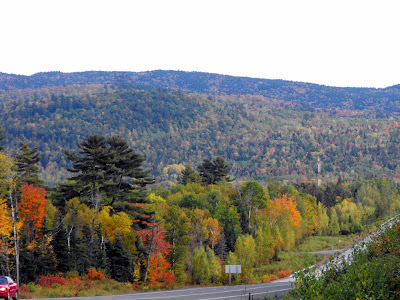 Hwy 7, Saint John to Fredericton, NB, Canada
Timing is crucial and we were on the hunt for the maple trees whose leaves turn red due to the glucose in them.  We would have seen more had we been in and for that time but as it was we found some beautiful colors in the Maritimes before we left there. 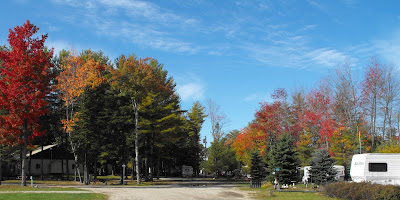 
Autumn leaves were showing up as we made our way south. We were following major highways and the opportunity to take pictures wasn’t easy but we did have some on our stay at this RV park in Maine. We love rv’ing and enjoy all the sights on our travels, but there is no doubt that autumn is a very pretty season all over this beautiful country of ours.


The answer is:
Deciduous trees, which is from a latin word meaning ‘to fall’, show green leaves during the growing season but when the season ends, they will show yellows and oranges which are actually always there but only appear as the green fades. This happens when the days shorten into the autumn season.  It is caused by an altered sun position, a lack of water, which is a major contributing factor plus other more scientific reason I won’t detail here :).
Posted by Sheila and Keith at 6:00 AM