We drove through Atlanta, Georgia on a wet and dreary day but there was one bright spot during the day and that was the Georgia State Capital building. We were busy concentrating on the changing freeways, which can be challenging while pulling a long RV, anytime but especially in busy times when not everyone is willing to let you change lanes when necessary. I would even say that ‘no one’ is willing to give you the space. They will even race up to pass rather than let us move over, but I digress, I saw the gold dome almost shining like a beacon up ahead as we made our way to the RV park just north of the city. 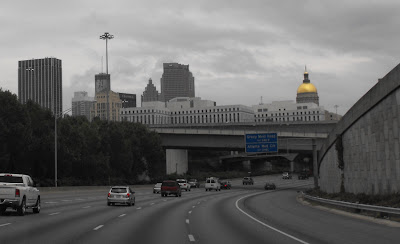 The 75’ diameter gold-leave dome was first gilded with 43 oz. of gold from the Georgia mountains in 1958. It has been touched up twice since then in order to retain the shine. The 22.5’ female copper figurine topping the dome is holding a torch and sword and weighs 1,250 lbs. It would have been amazing to get a closer look as well as an inside look but sightseeing in the city while still towing the fifth wheel isn’t recommended, nor is it wise to ask the driver to look at the sights while he is battling the traffic on a busy freeway !

The next morning was a sunny one and we headed north to continue on our way to Tennessee. We followed I 75 N and would pass through Chattanooga, Tn on our way to Crossville, where we would spend a couple of days. We stopped at the travel info center on the south end of Chattanooga (I love that name), to get maps of the state and information that might be interesting. You usually need to ask for the state map and their tourist book at the desk. They’re very willing to give them to you, but at most info centers on our travels you won’t usually find them on display with advertising brochures. 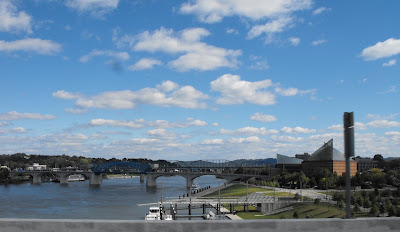 We then get back onto the freeway to carry on. It looked so easy on the map but as it turned out, the signs didn’t direct us onto the right access to the road we wanted. We wanted to take the secondary highway and not the mountain pass, but rather than make a third attempt to get onto that road….. we decided we would take that scenic mountain route and enjoy the drive ! Therefore, I only got one picture of Chattanooga, too busy reading the map and trying to navigate to get more ! 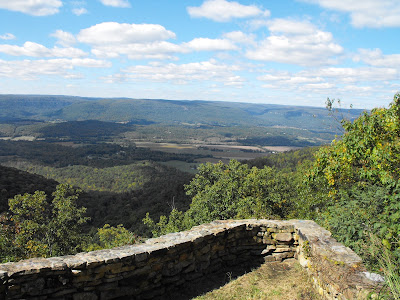 Our drive up Hwy 27, getting to Hwy 127 was a winding but scenic drive up through the mountain pass and we enjoyed seeing the small communities on this fall day. The leaves had started to turn and gave some pretty scenes on this sunny drive. 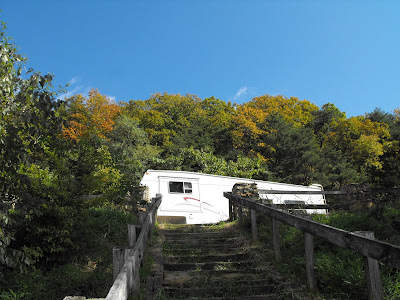 We pulled over on the only viewpoint we found to stop for lunch and enjoy the view. Traffic was very light thru here and only the few locals would use this road. It would have been the only highway at one point before the freeways were built and was still in good repair. We do enjoy taking the roads less travelled at times and this one was a good choice, albeit not intentional.
We passed through Dunlap, Tn and almost every business in that town had decorated for the season. Even government buildings will have pumpkins, bales of hay, straw people and other autumn and Hallowe’en decorations, it is great fun to see. 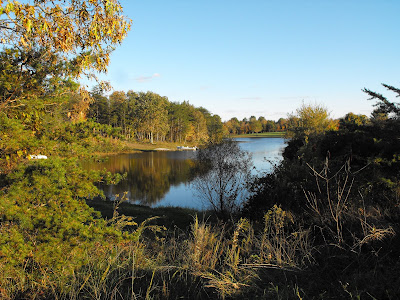 We arrived at our destination late afternoon and once set up at our RV park, we drove through the countryside getting familiar with the location and enjoying the Tennessee countryside. It was a peaceful place to be. 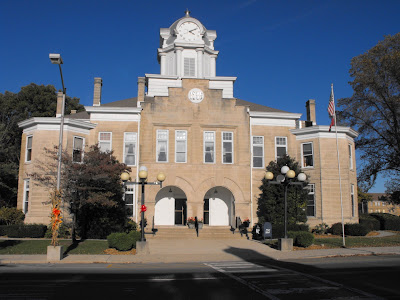 Crossville, Tennessee is 110 km (70 mi) north of Chattanooga and is centered around two major federal highways, which implies it was named for it’s location. It sits atop the Cumberland Plateau with an elevation of 565 m (1854 ft) and a population of 11,498.
Cumberland County was formed in 1856 and with Crossville being nearest the center of the county was chosen as the state seat. The city was incorporated in 1901 and still has an old downtown core but has spread out to include a large commercial center that brings in a lot of traffic from outlying areas. 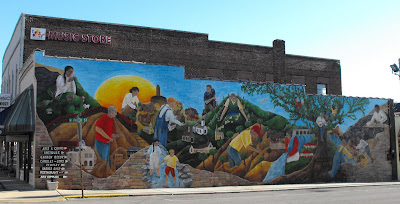 This Heritage Mural was painted by Katie Yamasaki of Brooklyn, NY. The wall was donated and although the information I found doesn’t say how long it took her to complete the mural, it would have taken quite awhile to do it. The mural is 73’ long x 19’ high and is bits of history told by many of the locals Katie got to know on her visit and includes bits of many people living there today. It is a great tribute to the history of Crossville and apparently has begun a trend of upgrading the buildings in the area. 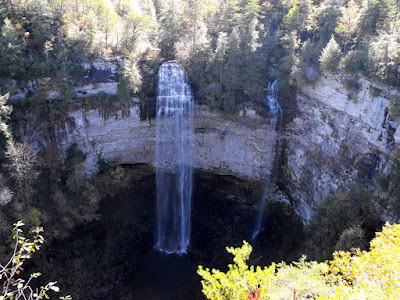 Fall Creek Falls State Park is more than 20,000 acres of what is said to be the “most scenic and spectacular outdoor recreation area in America”. This is Fall Creek Falls and drops 78 meters (256 ft) and is the highest in eastern United States. We were told the width varies from year to year and has been much wider or narrower than this other years. 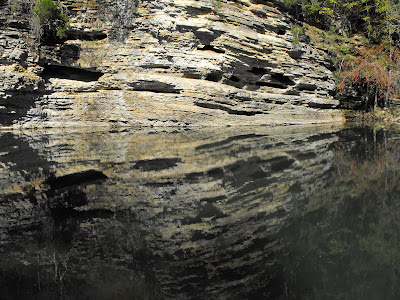 We spent several hours in the park following the paved roads and stopping at several places with a viewpoint or another photo opportunity. This was a pretty place with a wide spot in Cane Creek that gave great reflections of the interesting rock formations. 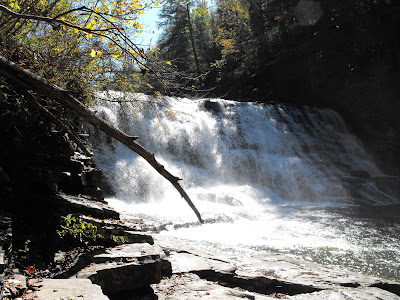 There are other falls in the park, this one is Cane Creek Falls, and there is also Piney Falls as well as Cane Creek Cascades. We walked down the staircase for viewing of the falls and then down rock steps to get down to the bottom of Cane Creek Falls. There were several other people down there enjoying the sound and the view as well. 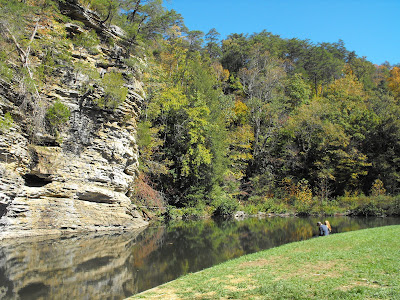 On a sunny autumn day many miles away from any large center, we found there to be a lot of people enjoying the Fall Creek Falls State Park. The leaves were turning and that may have been the big attraction but we were surprised at the numbers. All, young and old were there to enjoy the peace and the beauty. 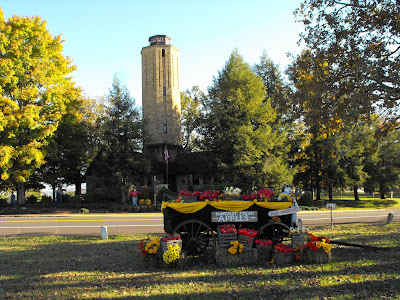 
The tower was constructed in 1937-38 as the government administrative offices of the Cumberland Homesteads. The homesteading program was part of the Franklin D. Roosevelt administration during the Great Depression.
The octagonal stone tower holds a water tank and a stairway leading to a lookout platform at the top. Most of the original 252 homesteads can be seen from here. . Visitors may climb the stairs, all 97 of them to the lookout platform to enjoy the view from the top. The building was opened as a museum in 1984, with the four rooms housing a gift store and museum displays, many of which come from Homesteader families.
Posted by Sheila and Keith at 3:35 PM