We love RV’ing but getting from one place to another isn’t always the fun part. We followed the highway to get us to Quebec City. We did manage to get through what seemed to be an early rush hour traffic in Montreal with construction ongoing and freeways entangled with each other, or so it seemed. That was definitely a challenge to get through but with the help of Miss GPS, we did make it.

I have always wanted to see Old Quebec city so was very excited about this but we did not know quite what to expect when we arrived in Quebec. I will admit that I had my biggest trepidations about this part of our RV adventure, only because we do not speak French, let alone know enough to understand it should we need to. My French classes in school happened many years ago !

Once we got there, the most challenging thing was reading the road and street signs. They are all in French but with the help of the maps, and some luck we learned our way around quite well. All those that we spoke with were able to speak English, thankfully.

There were some misunderstandings with the accent, but we worked around that. We did drive the truck downtown and parked near the entrance to the old city, but wouldn’t suggest taking it in there with their very narrow crowded streets. 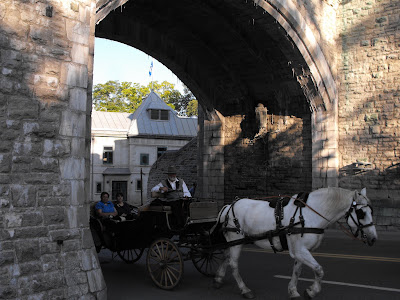 The wall of Quebec City, Quebec

A great way to see inside the walls of old Quebec plus more is to take a carriage ride and that was the first thing we did once we got there. I had asked one driver if he was available, but he wasn’t and told me to go down the street to the stop and someone would be there shortly, the cost was “eighteen dollars” so we went to wait for the ride.

It turned out that we had to move onto another stop for a carriage, having waited awhile at the first one, and we hired Ricardo for our driver. He was a great tour guide and we enjoyed the hour with him. He grew up in the city and had stories to tell as well as the history of the city to share and he would throw in bits of current politics as well! It was fun. 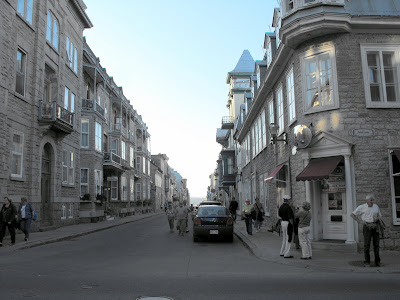 
Saint-Louis street leads us right down to the Chateau Frontenac and to the Place d’Armes. This seems to be the gathering place for tours and there are many of those coming into the city. Statues stand tall all over the city with stories to tell. 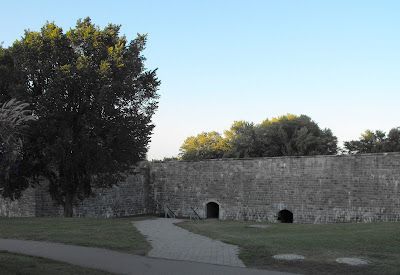 It was when a war between the French and the British began that the wall was built to keep the British out. If these walls could talk . . . they’d have many stories to tell.
There were so many battles with Quebec City that they put that wall to good use and it served a good purpose.
The Constitutional Act of 1791 divided Canada into Upper Canada for the English speaking and Lower Canada for the French speaking colony. Quebec city became the third largest port in North America by the early 1800’s with lumber the largest export.
Quebec City has been the capital for over 400 years of its’ existence. 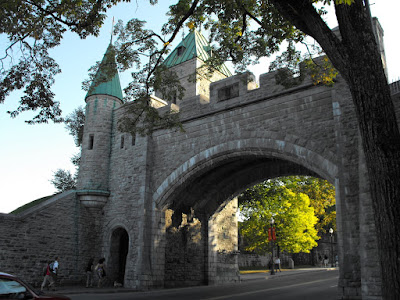 
There are several gates to get into the city but this is the main one that we used and it brings you into a world of old. These are the real walls that were built to protect those who lived here many years ago and makes it unique from many other places we have visited that are reconstructions of the real thing. 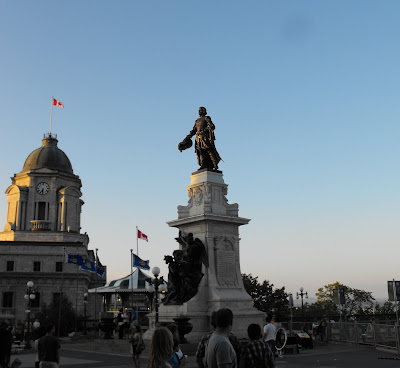 Quebec was founded in July 1608 by Samuel de Champlain. It was a French settlement mainly used for fur trading and for missionairies. Champlain was a French explorer and diplomat and was called “The Father of New France” and served as administrator for the rest of his life. 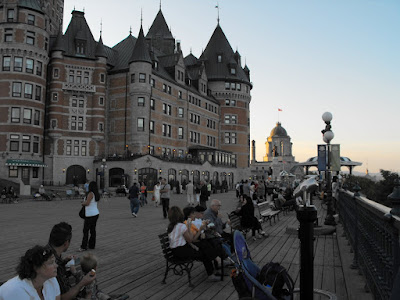 Quebec was originally Kebec, an Algonquin word that means “where the river narrows”.
It is amazing to stand here and realize what has happened over the centuries.

We did drive by the Plains of Abraham and our tour guide described it as the bump in the park, it really is nothing more. There are monuments to commemorate the soldiers lost. The 250th anniversary of that battle was celebrated while we were in Quebec City but our invitation must have been lost in the mail as we didn’t know about it till after the fact. 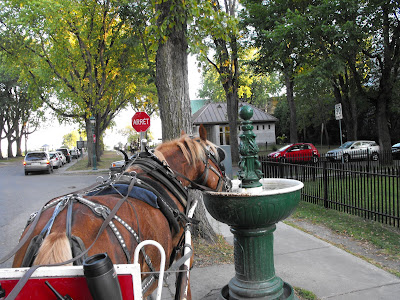 Horses Get Own Water Fountains

There are two fountains around town that the horses will stop at for their drink while on the tour. These were donated by a lady many years ago for this very purpose. There is a perch at the top for the birds to get a drink from as well as a spot at the bottom for the dogs to get their drink. And did I mention that the price of the carriage ride was not "eighteen dollars" as I'd heard, but was "eighty dollars" when we got to the end of our ride. I must learn how to understand that French accent! 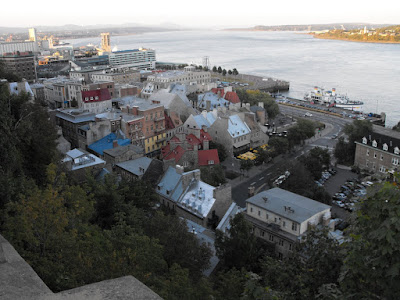 
The Old Port District with these narrow quaint streets were a walk back through time and we enjoyed just wandering and enjoying the atmosphere. There are many trendy boutiques, galleries and restaurants to enjoy. These old buildings are adapted for today’s shopping, but still retain their character. There may be drawbacks to operating a business behind these old walls but the charm they offer is appreciated by everyone else. 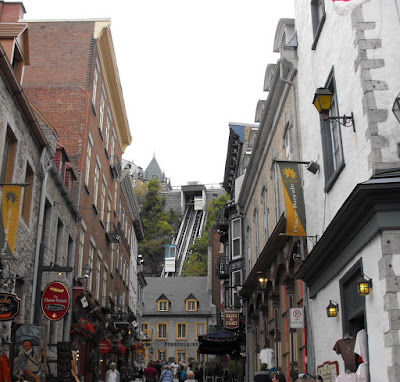 
Quartier Petit-Champlain is located at the edge of the St. Lawrence river and directly below the Chateau Frontenac. There is the Funicular, which is like an elevator on tracks and rides up and down the hill if you prefer to not take the stairs. The ferry crosses the river right below this spot, which allows foot passengers to come over from the other side and do their shopping in this area and the old Quebec City. 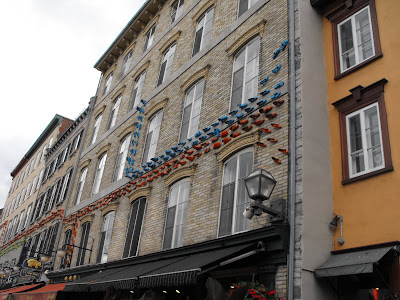 Shoes on a Building in Old Quebec

I could not resist this picture. As we walked along the street from a distance, I wondered what was making the streaks of color on the building. It wasn’t till we got close enough that I saw it was painted shoes !! Someone very creative did this and there were others in this section of town with some very creative decorating. Another example of adapting old buildings and their décor.


Three things We're Learning on our RV trip across Canada:
1) Should have paid more attention in history and geography class
2) French :-)
3) Large trucks and old narrow lanes are not a good pairing

Googlemap: We drove from Ottawa to Quebec City:

Posted by Sheila and Keith at 7:56 AM