Parliament Hill is crown land on the south banks of the Ottawa River and home of the Parliament Buildings of Canada. They see over three million visitors a year. Originally the site of a military base in the 18th and 19th centuries, it began to develop as government buildings in 1859.
There were a number of extensions built then a fire in 1916 destroyed the Centre Block. It took form as is and the Peace Tower was completed in 1927. There is an ongoing one billion dollar renovation and rehab project that started in 2002 and will complete after 2020. Centre Block is expected to be closed for a total of 5 years to carry out extensive renovations before 2012. 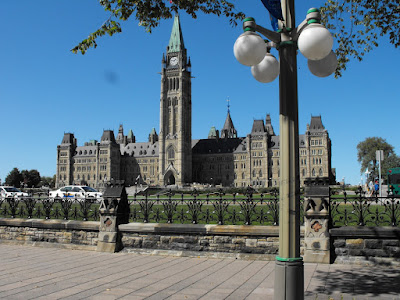 Parliament Buildings of Canada ~ Ottawa, Ontario
The south front of the property on Wellington St. is Victoria High gothic wrought iron and the formal entrance is called Queen’s Gate. The front is laid out as a formal garden and is the site of major celebrations, demonstrations, traditional changing of the guard, Canada Day and the Light show, which is held nightly during the summer season. There are monuments commemorating those that have had a great influence in our Canadian history all around the grounds where one is free to wander and enjoy. 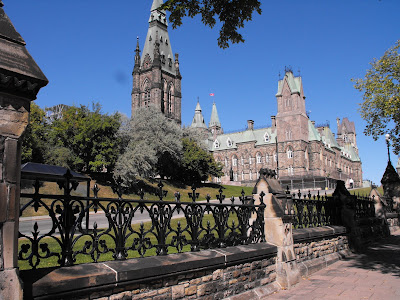 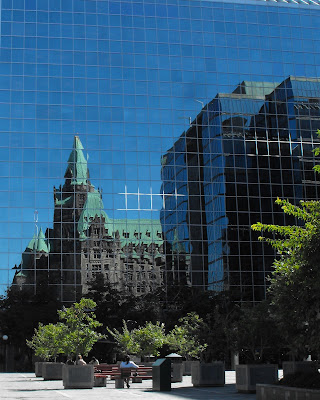 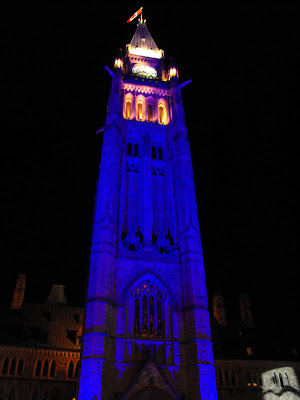 Light show at Parliament Buildings of Canada
We visited Ottawa at the end of the season and were able to see the light show, which gives a wonderful story of Canada. The buildings are used as the canvas with music and lights making it a great show. We sat in bleachers set up for the tourists and seeing the show, feeling pride at being a Canadian.
Posted by Sheila and Keith at 3:57 PM