We’ve passed through Washington State on our way south and the travels in Oregon have begun at Biggs as we follow the World War 2 Veterans Historic Highway. 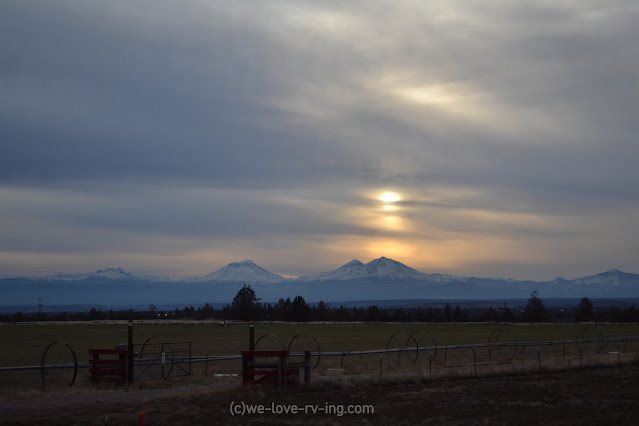 A dark and cloudy day in Oregon

We had several rain showers on our travels this day so not a lot of sunshine to enjoy yet but that offers some drama when the sun shines through the clouds to highlight one of the mountains like this.  It did make for a dark day with all those clouds but travel was good. 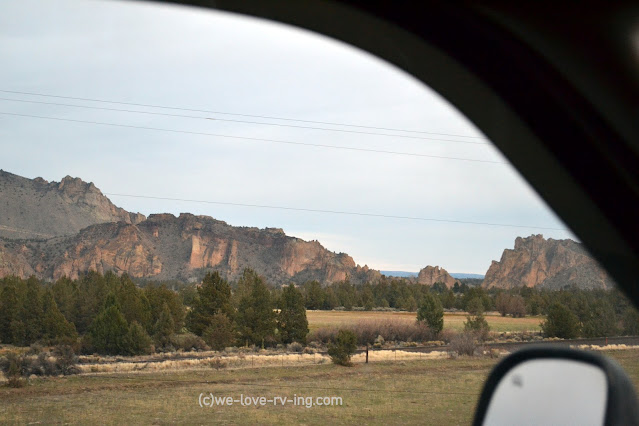 Now we’re passing rugged scenery more like that we might see in other states or those in our own back yard at home.  Don’t quote me but I think this may be part of the John Day Fossil Beds National Monument.  They were definitely interesting looking enough to take photos! 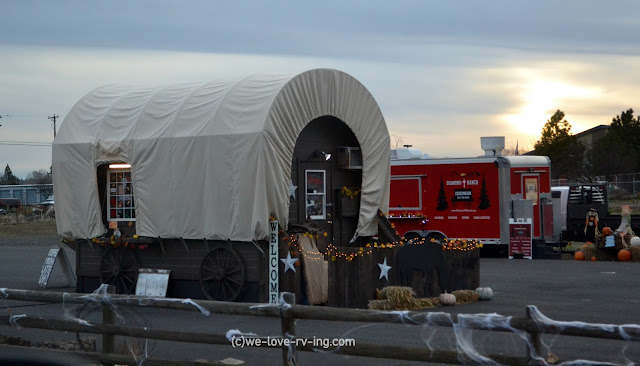 Hallowe’en is a time of big celebrations in the U.S. Total consumer dollars spent is second only to Christmas and parties to celebrate are just behind NY Eve and the Super Bowl.  This quaint little shop attests to the interest with pumpkins décor well after Hallowe’en. 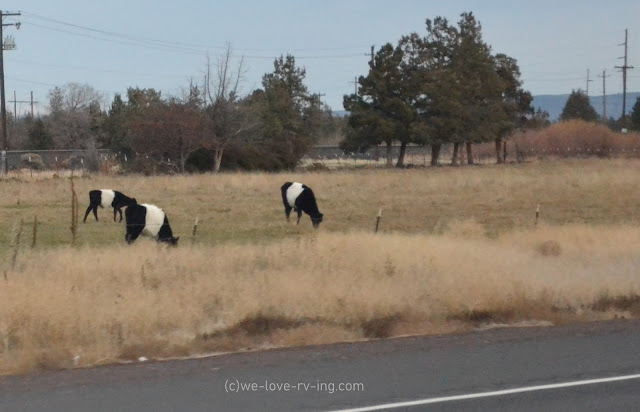 These cattle are the Belted Galloway and because I had only seen them in the UK before, I had to take this photo.  Their history is interesting; they did originate in Scotland but have been over in North America for many years, but just not often seen.  They are so distinct looking that they catch the eye. 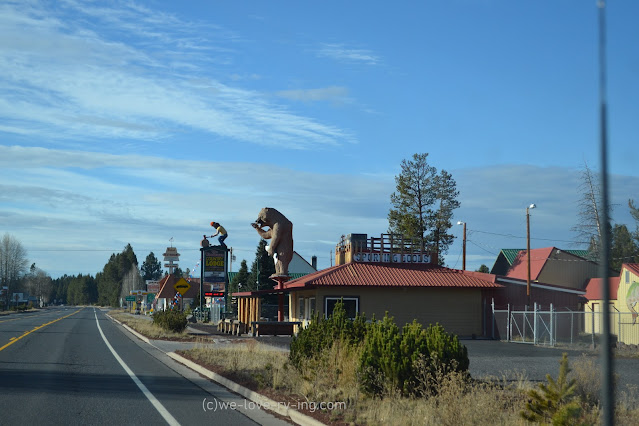 We are now passing through several small communities in mid Oregon, including La Pine, Oregon, a community that offers some interesting rooftop carvings.  They may be chainsaw carvings and their blue sky above makes for warmer thoughts as we pass through La Pine. 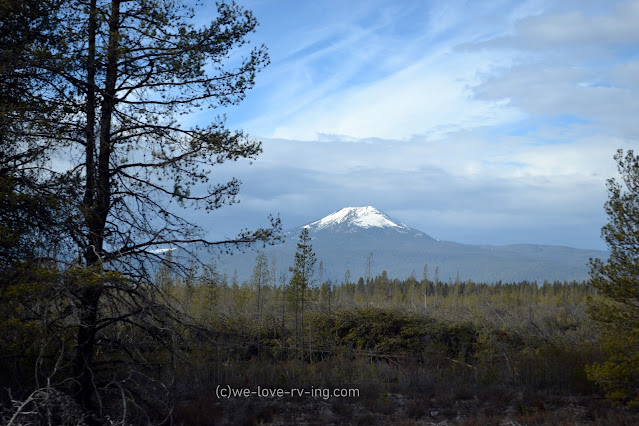 Those who are familiar with my blogs, I apologize but I cannot take enough photos of snow capped mountain and this one is no exception. I do take these photos as we drive so not all allow for a nice framing with trees as this one does.  To the east of our travel through Oregon are many National Forests so the sights are likely to include mountains. 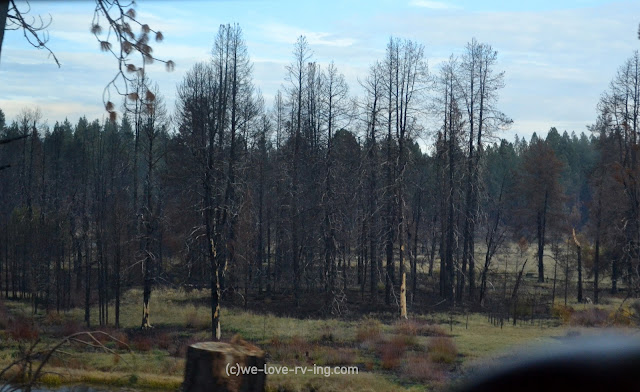 We drove several kilometres (miles) through the remains of forest fires.  These were being cleaned up by many crews working on them as we passed by.  Always sad to see but from what we did see, it didn’t seem to involve any homes. 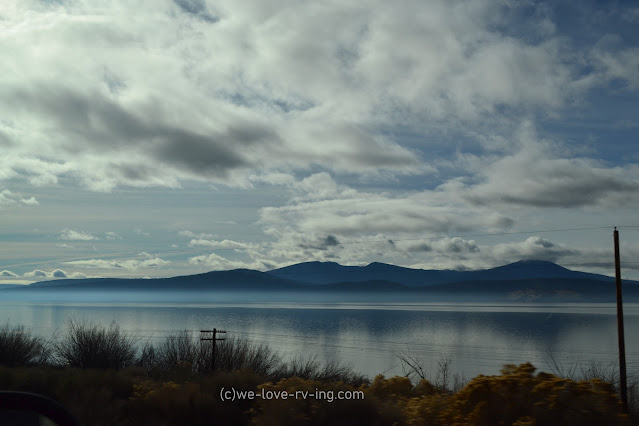 We pass the very large Klamath Lake as we approach Klamath Falls in southern Oregon.  It is the largest body of fresh water in Oregon and the source of the Klamath River.  Known for good trout fishing in the spring and fall, it is also a great source of algae used for food and medicinal purposes. 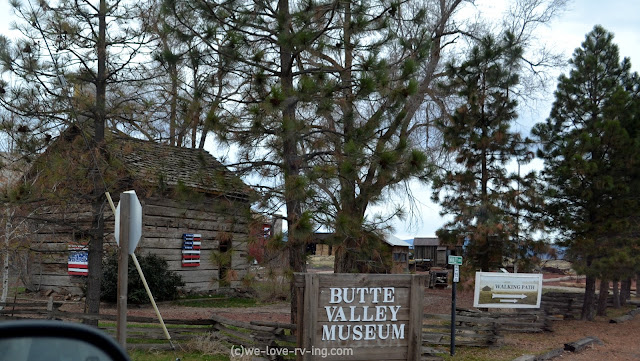 The border crossing into different states is not marked other than welcoming signs, which I don’t always see, but California has a crossing we must pass through in order to check for agricultural pests. The one on Hwy 97 is just past the first small community of Dorris, in California.  The remnants at the south end of town is an old beehive burner which I featured in a previous blog through this area and the Butte Valley Museum likely has a lot of history to learn about.  That could be a stop another time. 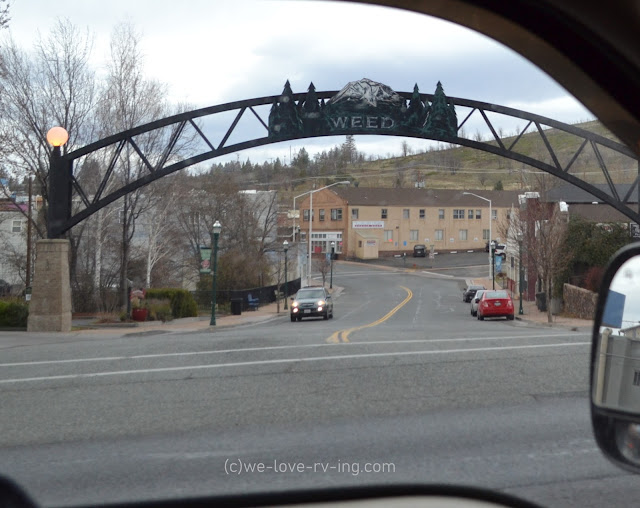 We’ve crossed into California and continue on Hwy 97 for about 50 miles to Weed, history of name given here.  This route leads us to I-5, which we will follow down through California for awhile.  We certainly have entered more traffic than we’ve seen over the past few days but it causes no problems and the drive continues into the dark.

One more day and we’ll reach the end of our driving for awhile.  The travel is enjoyable but the destination is a welcoming sight when we get there.

A Sunny Drive through Washington State

After a long awaited day, we left home to travel south for a while.  The CoVid pandemic had sent us home across the Canadian border in March 2020 and the border finally reopened to welcome the Snowbirds back, as well as any travelers who were safely protected from the virus.

Westwold, BC
Although it was mid-November, we’d not had any snow at home but we did see some as we made our way through Westwold, which isn’t far from home.  We were happy to be missing snowy weather, not something we enjoy driving in. 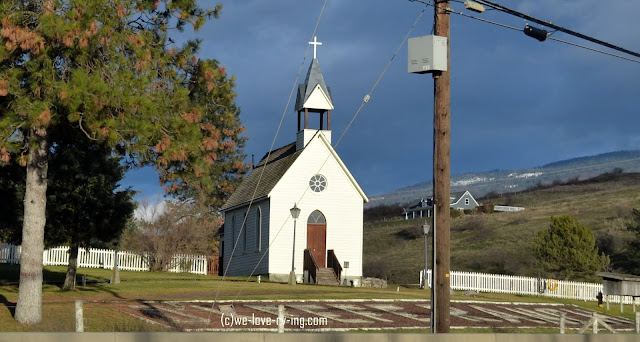 The O’Keefe ranch in Vernon is a great place to take the family and see the many heritage buildings, including the church.  It was founded in 1867 and had O’Keefe family living there for 110 years before it became a museum for all to enjoy.

We crossed the border at Osoyoos, BC and followed Hwy 97 down through country that looked very similar to the orchards and countryside we’d left behind.  The colors of autumn cover the hills and fields with their last life of the year. 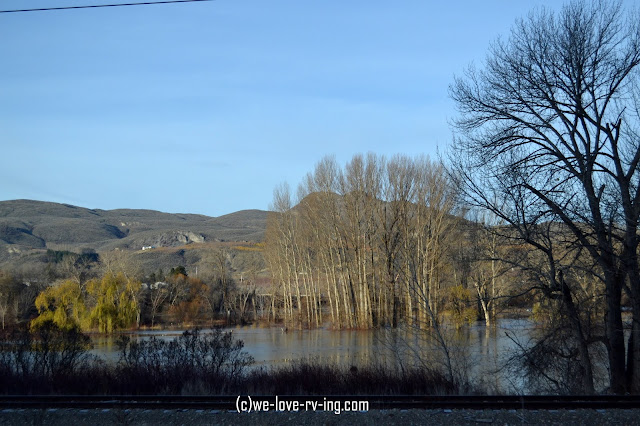 Okanogan River
The Okanogan River (American spelling) was showing signs of flooding and as it turns out, on that particular day the water reached a high level creating a lot of flooding but thankfully hadn’t reached the road we were on. 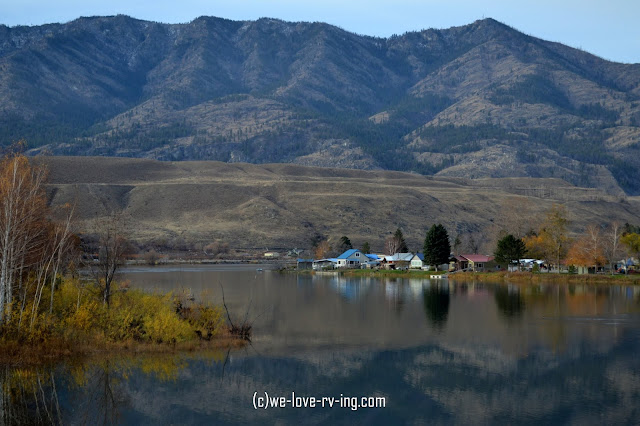 This is of nothing real special yet it offers such a peaceful scene.  I’m not able to identify the row of mountains showing but before we reach midpoint in the state of Washington, we’ve driven on the eastern side of Okanogan National Forest, Cascade Range, Chelan Mountains and Mt. Baker Snoqualmie National Forest. 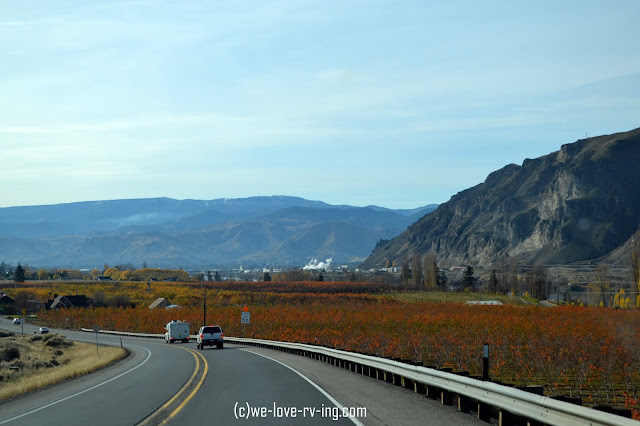 Wenatchee, Washington
Wenatchee, Wa is known as the “Apple Capital of the World” to the population of 34,000.  The visitor center has a short film to watch about the apple industry and they have apple tastings, too. They get plenty of sunshine a year and have been known for its apple orchards ever since its orchards were first planted in 1872.

We are passing through Wenatchee when we see this great sight of the snowy mountains up ahead.  We’ve travelled Hwy 97 before and always enjoy the sights.  Winter is coming and snow is arriving up in the mountains getting ready for the ski season for a ski resort up there. 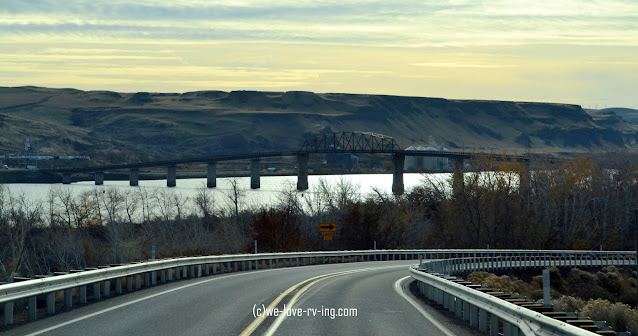 Once we get to the southern half of Washington State, we drive across the Lincoln Plateau of the Yakima Indian Reservation, a calm and quiet drive to enjoy. We then descend down from Maryhill, Washington to the Columbia River where we cross over the Sam Hill Memorial Bridge into Oregon. 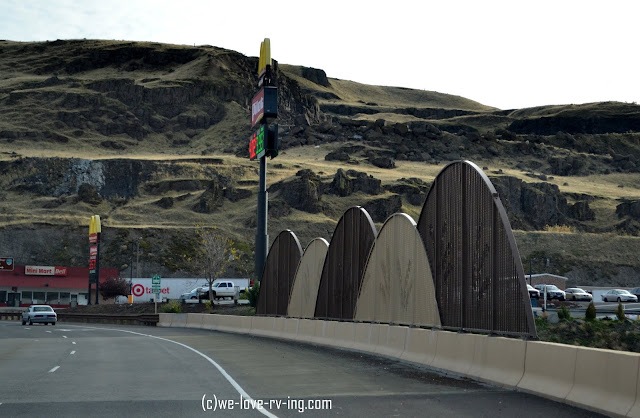 Biggs is the beginning of the World War II Veterans Historic Highway and the first highway in the nation to dedicate the appreciation to veterans.  This next stretch of road through Oregon had several training sites that were used for WWII.

Our following days include some great sights of Oregon, another beautiful state in the USA.