A vist to an Iroquoian Village and Crawford Lake Conservation Area

We love RVing to all kinds of places, and want to see everything we can while we’re there. That can’t happen but we definitely make an attempt to see as much as we can to know what the area has to offer. When we think of being in the Toronto area, we think of the big city and all that it offers. There is so much more to see and that was our plan. Southern Ontario is a beautiful place to visit and we wouldn’t have known where to begin, other than some suggestions by friends at home, but this is a very large province ! Karen has lived here for many years and knows the area well, but there are some places she has not visited that were on her ‘to do’ list. So we set out to see something new for all of us.

Our destination was the Conservation Haltonn area which includes Crawford Lake, and Iroquoian Village and Rattlesnake Point and all that was just up the road from our RV grounds. This was purely a coincidence because we didn’t know where we were going when we booked but what a nice location it turned out to be. Karen arrived with goodies to add to ours for the picnic we were going to enjoy and we set off for Crawford Lake.

The Crawford Lake Conservation Area is part of more than 9000 acres of conservation lands being protected. We would never see it all but we were prepared to do some walking today. 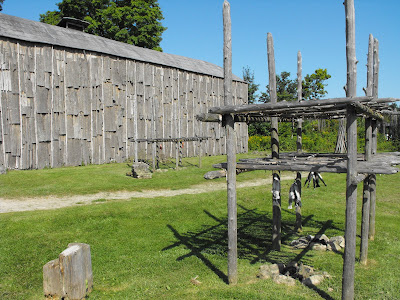 Drying racks at Iroquoian Village
First we would enter a world from the 15th century. The Iroquoian Village is just off the parking lot we arrived in, and is surrounded by a Palisade, the wall enclosure to secure the village. This village was reconstructed based on facts found in archaeological digs, written records from early explorers and Jesuit missionaries and even from First Nation Elders who to this day, honor their traditions.

The Turtle Clan Longhouse is the smallest of the 5 longhouses which were here in the mid 1400’s. It housed about 30-40 people who would all be related on the mothers side. By the count of the homes and information gathered, it would be approximately 250 people who lived in this village. It is nothing like the villages we’d visited in other parts of Canada. Interesting to see the differences. 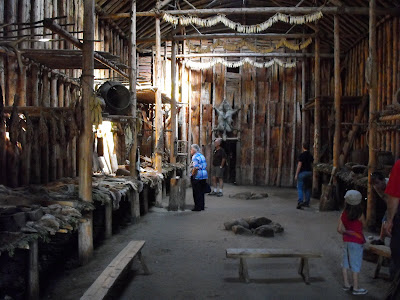 The interior of Turtle Clan Longhouse
Inside the longhouse shows their fur-lined beds along the outside walls, the corn hanging from the top for drying, which is how they dried their harvest. Real corn is not used in displays as the local animal population would be here for all their after hour dining. We were able to see how the Iroquoians lived so many years ago. Thankfully the fire wasn’t going, it had to be pretty smoky in there at times but that was all part of it. It likely had a purpose too, as all things did. The drying racks display how they would dry their fish. All so primitive but practical. 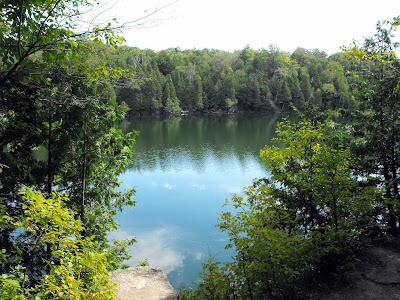 Serene view of Crawford Lake
We carried onto Crawford Lake, a short hike from the Iroquoian Village. It is a nice path thru the trees and rocks that appear untouched by anyone visiting the lake. The paths are wide enough to handle the traffic and we timed it nicely on the first day of school as they are booked solid throughout the year for visits from area school kids so we were enjoying the quiet.
Crawford Lake is part of the Niagara Escarpment. It is a rare meromictic lake (definition: A lake in which some water remains partly or wholly unmixed with the main water mass at circulation periods.) which gives so much information about the natural and cultural history of the area. Discovery of the Iroquoian Village is a result of studies of the sediment in Crawford Lake. It is amazing how a lake can tell the story ! 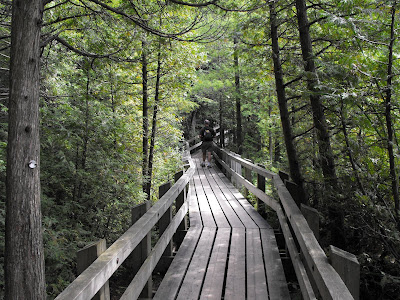 The boardwalk goes all around Crawford Lake
The boardwalk circles the lake and gives several views with sitting areas to be enjoyed. We didn’t see any wildlife on our visit but we did see several dragonflies darting about and several fish in the water. 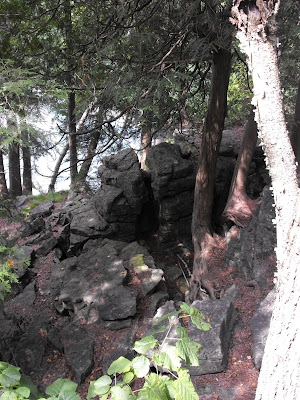 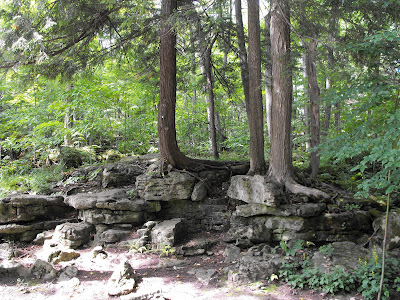 Looks like an old retaining wall
Limestone landscaping is very creative. There are places that look like someone has built a retaining wall – very interesting shapes all over. 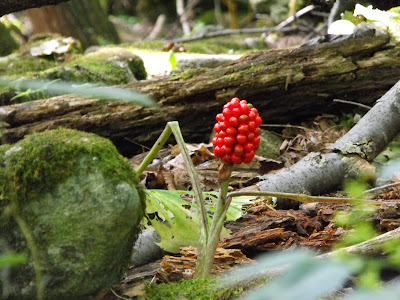 This little jewel stands alone
Soil is very rich although shallow but provides lots of flora and fauna for the local habitat and offers the occasional surprise as seen in this photo.
Stay with me and I will take you onto other excursions as part of our Cross Canada RV adventures. Come and follow us to Rattlesnake Point to see what we could see.

http://we-love-rv-ing.blogspot.com/2009/09/rattlesnake-point-conservation-area-in.html
Posted by Sheila and Keith at 6:46 PM 2 comments: