We set off on a sunny morning from Creston, BC, Canada after an overnite stay at the Sunset Motel east of town. Now we were approaching the East Kootenays, on our way to visit Karen’s cousin and see some sights in Alberta. Traffic was fairly light and we followed Hwy 3/95 through Moyie onto Cranbrook, BC, Canada where we stopped for fuel but no time to stay, we were on a mission to get to Alberta today. 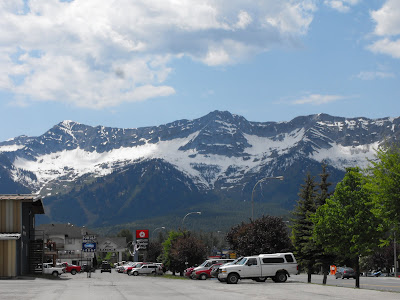 Fernie, B.C., Canada
We were starting to see some beautiful mountains as we approached Fernie, BC, Canada and we pulled into a park for some picture taking but with all the trees, the mountains were not visible. Good time to use the park facilities, though. 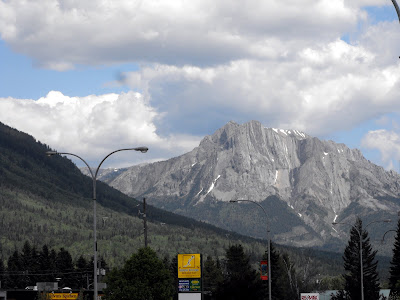 Fernie, BC, Canada is called the “Gateway to Elk Valley” and is rich in native history and coal mining. They now offer year round events too many to mention, but check out this website. http://www.skifernie.com/

We went into town and took pictures from the main road thru town, Hwy 3, which shows a great view of the mountains no matter which way you turn. We drove around looking for the best view without power lines and stopped long enough to take some pictures then were on our way again. 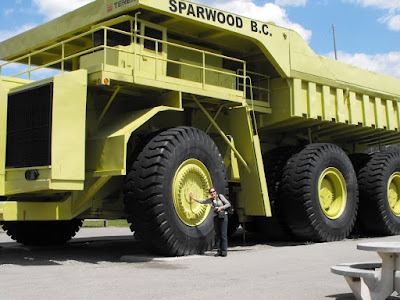 We arrived in Sparwood, BC, Canada in time for a late lunch at a neat spot that Karen had been told about. We had the best lunch and were glad we’d waited for it.

Sparwood, BC, Canada is known as the “Heart of the Elk Valley” and home of the largest truck in the world. We just had to get a picture of that. Sparwood is a small town and once known predominantly as a coal mining town, where these large trucks are used.
A great way to learn the history of the mining is to check out this webpage of a virtual museum: http://www.sparwood.bc.ca/virtualmuseum/index.html
It is still a mining town, but is now more diversified with tourism and recreational activities being promoted. 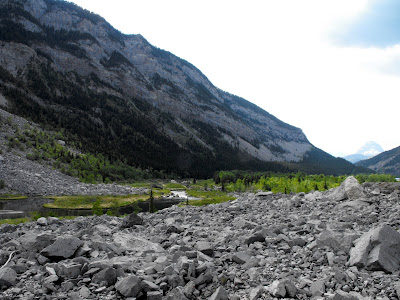 Our next highly anticipated stop was to see the Frank slide. We’d oohed and awed at the mountain views of the Crowsnest Pass we were driving thru with Karen identifying the mountains we saw, relying on her childhood memories and doing so well, too. We stopped at the Frank Slide Interpretive Center, which is situated on the slide, with views of the mountain and the rock still sitting as it did the day of the slide.

The Frank Slide happened April 1903 and 76 lives were lost. It is history that is well worth knowing and the story should be told. We were disappointed in the Centre but more for the lack of assistance the staff were giving than the center itself, although we weren’t impressed with the quality of the short film we did finally find to view, but the story is important. We did file a complaint with the office.

Karen’s cousin grew up nearby and gave us a tour of some local landmarks. We drove right into the base of the Frank Slide. It was quite remarkable to think of all that rock crashing down on the village of Frank. You can read the story on this link: http://www.mysteriesofcanada.com/Alberta/frank_slide.htm 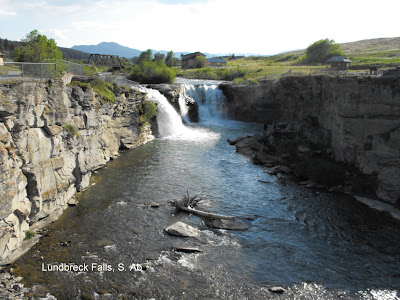 Then we went onto Lundbreck Falls just off of Hwy 3. They are so pretty, took lots of pictures from the top then walked down to take some close ups, too. They are part of the Crowsnest River and fall 12 meters. The town of Lundbreck is off the highway a bit so we didn’t get there but is home to 234 residents. It was named after Mr. Lund and Mr. Breckinridge in 1903 when they came to develop the area for mining. There is the Lundbreck Fall Provincial Recreation Area with year round camping and lots of outdoor activities to do, so a nice place to spend some time enjoying the Crowsnest Pass.

Posted by Sheila and Keith at 6:04 PM