There are many places we have on our list to visit and the was one of them.  We love rv’ing to these locations so that we can enjoy the journey on the way, which we did, but there was no way that I was quite prepared for the sight we saw on our arrival to the . 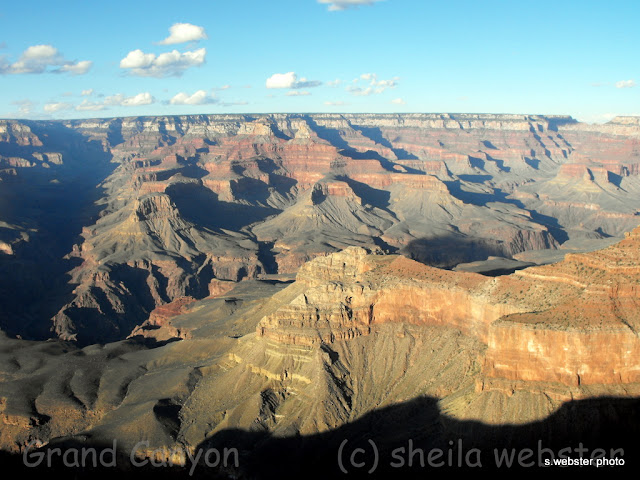 Afternoon sun cast shadows in Grand Canyon
We have all seen pictures, heard stories and likely even seen parts of it in the movies but it still took my breath away.  That may have been caused by a slight fear of heights that I do seem to have developed over the years, but that would have only been a part of it.  I approached that first viewpoint with  excitement and weak knees.  I was not disappointed, the view was absolutely breathtaking! 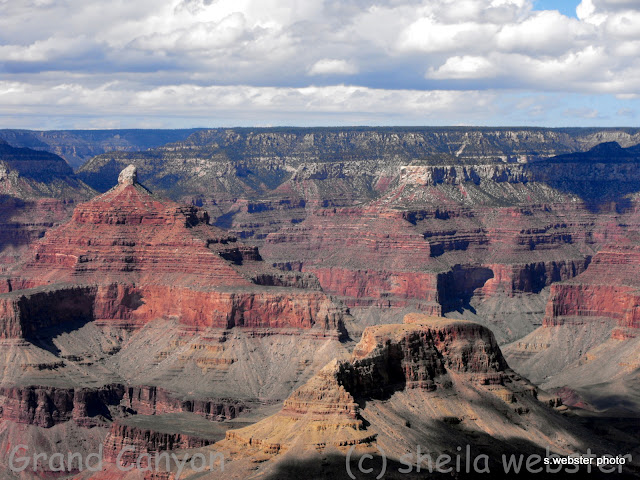 Incredible colors of the Grand Canyon
The is one of the Seven Natural Wonders of the world and is over 445 km (277 miles) long, 16 km. (10 mi) wide and 1.6 km (1 mi) deep.  The average winter visual range is 210 km (130 mi) and explains why we might find the distance to be hazy, but air pollution also plays a part in that. It is being monitored and the parks promote doing our part in conserving energy to avoid pollutants. 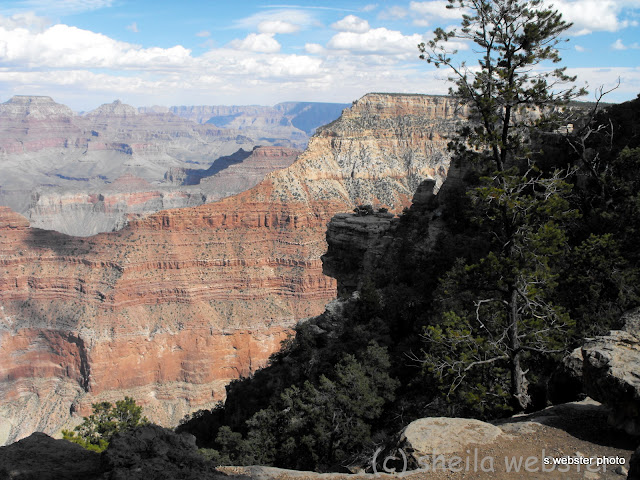 The profile in Grand Canyon
Our first visit was on an afternoon that there were clouds in the sky but the sun was shining and made the chilly day very pleasant.  We parked in one of the main parking lots that is located at Yavapai Point, also the location of the and walked along the paved paths to see as much as we could see.  This profile isn’t marked but the rock in the center of picture sure looks like one to me. 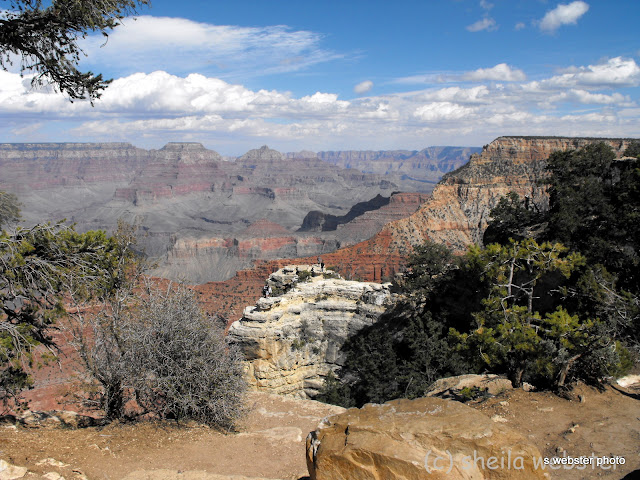 Grand Canyon views enjoyed by brave hikers
There are many viewpoints with rock walls or barriers of some sort to stop at and enjoy the view but there are also many places that you can just walk out to the edge and either test your fear level, pose for pictures or just get a better look at the .  These people had to do some climbing to get to this location. Click on picture to get a bigger one and then go 'back' to return to blog. 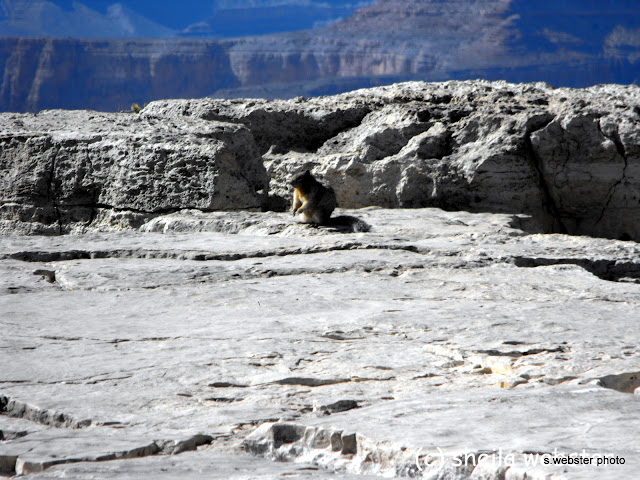 Rock Squirrel at Grand Canyon
There is wildlife in the but we didn’t see any where we were, except this little guy.  There are different kinds of squirrels in , depending your location.  We are at the South Rim and I believe this one is a rock squirrel and he appeared way out on this rocky ledge from seemingly nowhere, he must have a room with a quite a view. 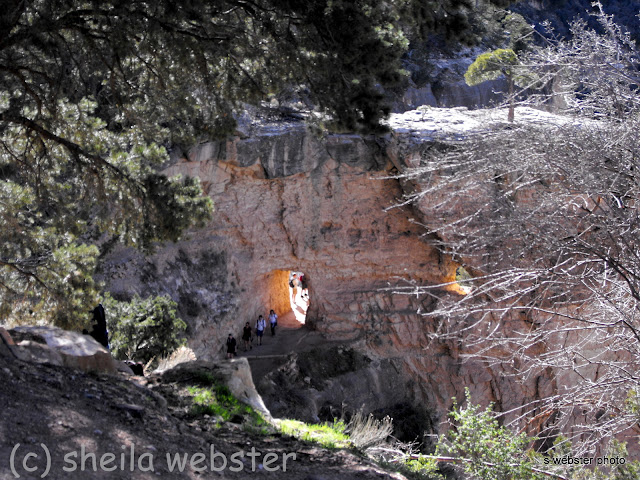 Bright Angel Trail in Grand Canyon
There are some marked trails to follow for those who wish to do some hiking.  Hiking was not on our agenda, but it was amazing how many people were taking this trail into the canyon to see more.  I understand it is quite a challenge and if you wish to learn more about hiking to the canyon bottom, clik on this link and scroll down a bit. 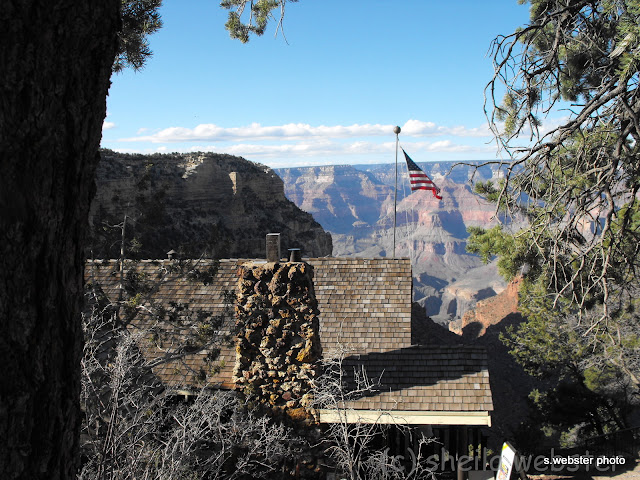 Kolb Studio at Grand Canyon South Rim
In 1904, the Kolb brothers built their home and photography studio at the very edge of the South Rim to take advantage of the visitors to this area.  They were one of the first tourist and commercial sites in the canyon.  The brothers operated their studio for over 75 years, being two of the earliest photographers to specialize in national park tourism and have been credited with how we view national parks.  The studio is now a National Historic Landmark.  More interesting history on the Kolb brothers is found on this link. 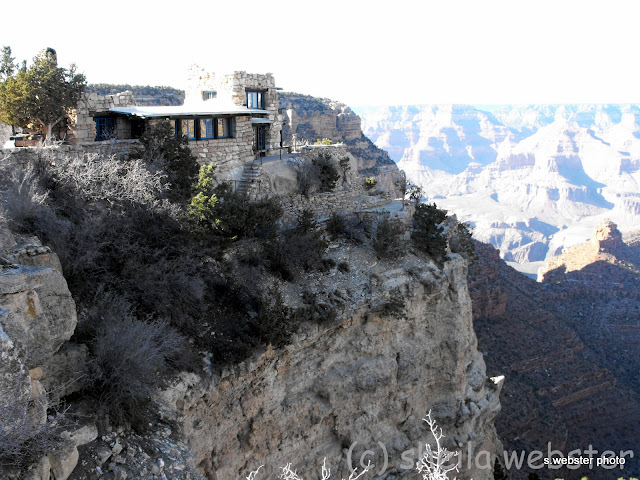 Lookout Studios at the Grand Canyon South Rim
Mary Colter was the architect who designed several buildings in this area, including the Lookout Studios, built in 1914. The ‘parkitecture’ design style that she used means that it blends into the natural surroundings and is built with local stones and wood. The Lookout Studio is now listed on the National Register of Historic places.
We were lucky to have another great day visiting the Grand Canyon as well as an unforgettable sunset before we were on our way, I will be sharing these with you later.
Posted by Sheila and Keith at 3:33 PM