A drive across Prince Edward Island is like a trip through time. The villages, the history showing in the churches and all that we know about this pretty little island gives us a welcoming feeling. The sunny day was a beautiful bonus to the day planned for our visit. The weather forecast said that Saturday was going to be the nicest day of the weekend, and that was so true. Sometimes that weatherman is right ! The Confederation Bridge, PEI
We left the RV in Moncton, NB and took a picnic to just spend the day in PEI. We stopped at the tourist center at the New Brunswick end of the bridge then took a walk down to the lookout for some pictures. What a sight this bridge makes with the impressive design, blue water splashing waves against the shore and a blue sky for a backdrop. The bridge has a curve as well as an incline that adds to the beauty of it. It really looks like a work of art from our vantage point on the beach. 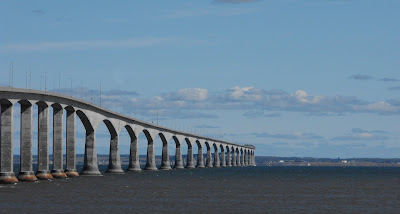 The Confederation Bridge spans the Northumberland Strait between New Brunswick and Prince Edward Island. This toll bridge, (the toll of $42.50) is collected as you leave PEI, is 12.9 km (8mi) long and takes about 10 minutes to cross. A car would not have a view over the solid concrete sides but in the truck we were able to see the water with boats out checking their traps. 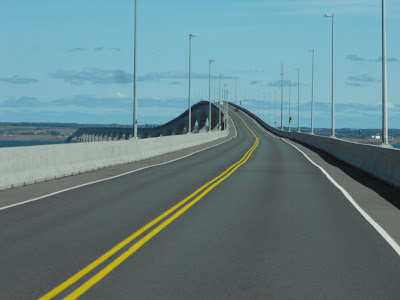 Hill on Confederation Bridge, PEI
The construction of the Confederation Bridge took four years to complete and over 5000 local workers were involved in this project. It opened in the spring of 1997 at a cost of over $5 billion. At the Gateway Village on the PEI side of the bridge, they have erected a replica of the bridge base and put names of the many that worked on the project on bricks at the base of the monument.

If you’d like to know more about the bridge, check out this link:
www.confederationbridge.com/en/design_construction.php 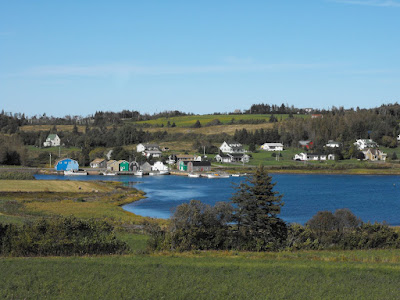 Pretty village setting.
The landscape of Prince Edward Island is different from the other Maritime provinces that we saw. It has rolling hills and very few big hills. It isn’t flat but is open, we didn’t feel closed in at all. We stopped at a hilltop viewpoint and we were looking down on this small village, which is similar to many others. They all look like they have come out of a storybook but have a history unique to all those that have lived there.

We followed the Red Sands Shore Drive for awhile then we were on Green Gables Shore Drive. These are quite well marked with roadside signs, but with so much to be looking at, it can be easy to miss them and take the wrong turn. The great thing about Prince Edward Island is that no turn is a wrong turn, you will just see more of the great scenery it offers. 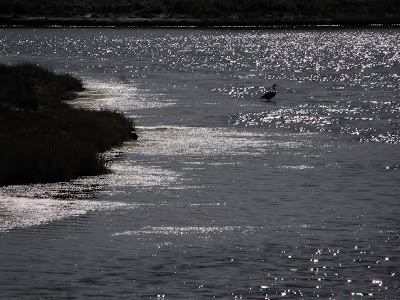 The Blue Heron is seen in several places on Prince Edward Island. I cannot resist trying to get a better picture than the last time I took a picture of a heron. Hopefully they all have something different to see. This one was calling across the water to another but with the sun on the other side of the heron, it made this one far more dramatic looking than his mate ! 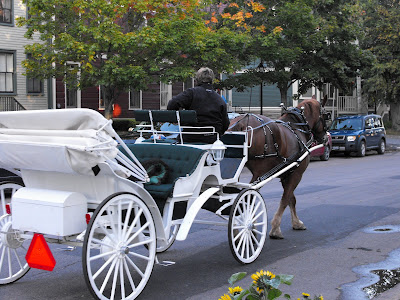 
Charlottetown is the capital of Prince Edward Island and has a population of 39,000. it was originally incorporated in 1855. For anyone wanting to take a ride about town, they have the horse-drawn carriage rides. 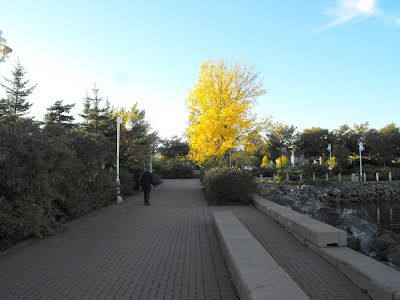 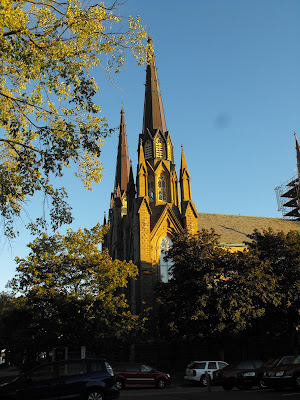 St. Dunstan’s Basilica is one of Canada’s largest churches. It was erected between 1897 and 1907, It opened in 1919 but three earlier churches stood on this site in 1816, 1847 and 1907. This one was consecrated and then elevated to the status of a basilica in 1929. It is known for its twin Gothic spires, and although we didn’t go inside, it is said to have an impressive alter and fine Italian carvings. 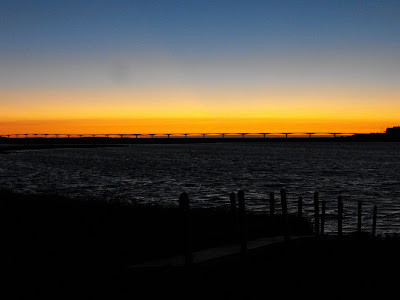 We left Charlottetown as the sun was setting to head back to the bridge to take us home to Moncton, where the 5th wheel was in an RV park. As the sun got lower, we got closer to the bridge and started getting glimpses of it in the distance. I mentioned that I thought the sunset behind the bridge would be such a great picture. Before I knew it, Keith was picking up speed and started watching for a way we could get down closer to the water. We did get down to a golf course but trees were in the way when I noticed a lane going towards the water right behind the trees. I made my way down the lane in the dark, dodging a bat in the process! Normally I would think that could be enough to see me run the other way but when time is of the essence for that perfect picture, nothing was going to distract me ! I am thrilled with the results.

I have more to come from Prince Edward Island. There is so much to see on this tiny island and so much to share.

Posted by Sheila and Keith at 7:49 PM