This monument does not get the same public coverage that Mt. Rushmore does internationally but it is an incredible attraction and I would recommend anyone to go to learn the story about the sculptor and how this has come to be where it is at now. It is a work in progress. 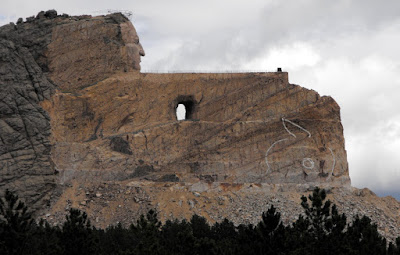 Crazy Horse Monument
The story of Crazy Horse is a great one and this monument shows the pride of the original people of the Black Hills. His quote is “My lands are where my dead lie buried”. But to me, the story is about the sculptor who designed and began this whole project. His name is Korczak Ziolkowski and he was born in Boston. He grew up in foster homes and was a completely self-taught sculptor. 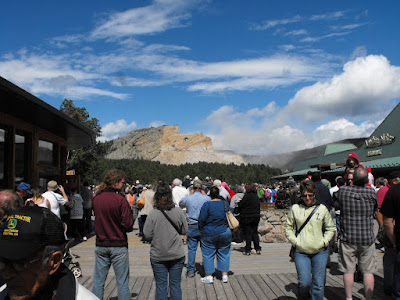 We planned to visit it during out stay but did not expect what we saw. It just so happened that the same day we planned our visit, there was to be their biggest dynamite blast yet, 45,000 ton of rock to be blasted off the mountain. It was great to see it, even tho it doesn’t have the drama that one might expect.

The short story shown in the theater following the blast was well worth seeing. It shows some of the previous blasts, which were done at night and show the blast contrasted against the night. It also tells the story from the beginning. 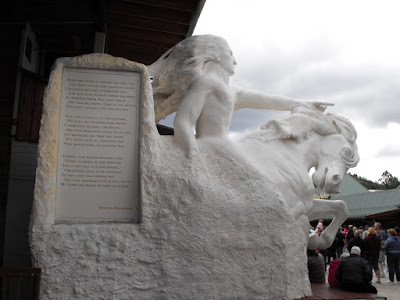 A model of Crazy Horse monument

Korczak had been an assistant to Gutzon Borglum at Mount Rushmore before going off to war. He had won awards and was noticed and was invited by Lakota Chief Henry Standing Bear to make a carving as he “would like the white man to know the red man has great heroes, too”. Between the two of them, they chose Crazy Horse, who was born in the Black Hills and was partially credited with Custers’ defeat at the Battle of Little Bighorn.

Korczak arrived in the Black Hills in 1947 to accept the invitation and began in 1948. He was almost 40 and had only $174 to his name. He had to endure many hardships over the years but was dedicated to the project. 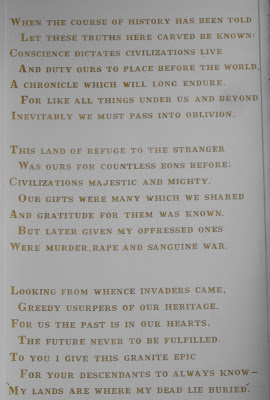 Korczak was a strong believer in the free enterprise system and turned down government funding of $10 million, twice. He felt Crazy Horse should be built by the interested public and not by the taxpayer. Korszak was a man of honor, dedication, tenacity and a warrior to the end. This is not an exact quote, I had no paper to write on but in the short movie we saw, I believe he was quoting a chief who said something like, “A legend is greatness, greatness is a dream. If you have no dream, there is nothing.” I believe he lived his dream. 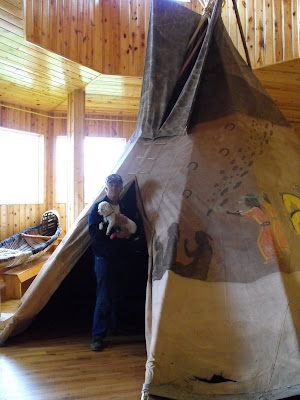 Tepe in the museum

Since his death in 1982, his wife Ruth works with the Crazy Horse Memorial Foundation Board of Directors and several of their ten children work on the project. There is an incredible Indian Museum of North America to be enjoyed while visiting Crazy Horse.

Check them out at www.crazyhorsememorial.org

Posted by Sheila and Keith at 8:43 PM